8
Break down of some of my Delena Playlist
posted by TotallyHannah
1) Holding On and Letting Go door Ross Copperman: The first real kiss of Damon and Elena in the episode The New Deal. On the porch which made it even better than the dying kiss. Damon was tired for feeling guilty for nothing, so he took matters in his own hands. It’s not like Elena turned him down. She wanted that kiss to. Elena said, “This is right.” Damon responds, “right now. It’s not right now.” (words might of been changed.) So even though she didn’t choose him in the finally, there’s still a strong chance.

2) All I Need door Within Temptation: This song is Delena all the way. It’s from the Miss Mystic Falls episode. When Damon stepped up to make sure Elena’s dance went well while is idiot brother was dealing his blood lust. Damon’s face when she came down the stairs zei it all. This was the first time we saw that look. In Georgia we saw a friendship form. In Isobel it was announced that he loved her but we knew before just door that look. Plus the look she gave him. Then the dance itself they were beautiful together. The small smiles they shared (more of Damon smirking) was a tear jerker.

3) I Was Wrong door Sleepstar: From the episode Rose this song made us all cry. Well us Delena fans cried. I know I did. When Damon told Elena that he loved her and didn’t deserve her. Well That was just sad and made me love Damon even more. He is the better brother for her. Before I go on one of my many tangents. This scene made us see another side of Damon. His protection came out so much while he was protecting her. To me, he did meer in the fight then Stefan did. He checked on her and left his brother to fight a vampire they had no idea who he was.

4) Your Guardian Angel door The Red Jumpsuit Apparatus: Damon is Elena’s guardian angel. All the times he protected Elena. The sacrifice he forced her to have blood, may have been selfish but he did it out of love. He would sacrifice her vrienden to save her. He may be irrational when it comes to her but he always saves her. He saved her from the hospital when Klaus wanted to drain her blood then promised to never leave. Which he won’t in S4 because he didn’t mean it when he meant the deal. Also she’s going to need him even meer than ever and Stefan knows it. Damon is the one that will probably help her the most with since she’s stubborn. Like Elena says Stefan lets her do her crazy stunts. Damon does too but always has a contingency plan. Also both say their feelings will get in the way.

5) Punching In A Dream door The Naked and Famous: Our Town the following episode of The New Deal. Showed the after effects of the kiss from the night before. Damon was cheery for him in the shower, while Elena worked her pent up frustration out at Alaric’s apartment. Seeing them liked that was seeing how it’s starting. Like Damon is finally taking the chance to toon her. She actually remembers that they kissed. She’s frustrated cause she’s now confused about her emotions.

6) Give Me Love door Ed Sheeran: Watching Damon and Elena dance in the episode Dangerous Liaisons was just breathtaking. How he complemented her beauty. I smiled the whole time even when she danced a little with Stefan. Cause when Damon she doesn’t have to ask for him to dance. He’s willing to toon her off on the dance floor with her on his arm. While Elena always has to beg Stefan to dance. Watching them doing the classic waltz brought tears. Plus both look amazing in there attire.

7) Addicted door Kelly Clarkson: Damon is addicted to Elena we know that. It’s also Elena that’s addicted to Damon. She even confesses that he consumes her. That she can’t shake him. He’s gotten under her skin.

8) u Lost Me door Christina Aguilera: Reminds me when Damon and Elena go to Duke and come back, she tells him, he has lost her. I wanted to cry at that moment cause of his face. Elena is one of his only friends. He would be lost without having at least a friendship with her. Luckily she didn’t stay that made at him cause she was talking to him not long after. She understood that Katherine hurt him and that he was acting out. He took it too far when he snapped Jeremy’s neck.

9) Never Let Me Go door Florence + The Machine:Heart of Darkness finally gave us real good hope. That kiss was just passionate and raw. It was pure and just words just are hard to describe this kiss. This was the kiss the third season led to. This song was perfect choice to play. The chemistry between the two was undeniable and Elena felt it all. She just went for it. She made the first verplaats and it means she’s slowly getting there.

10) Dark Side door Kelly Clarkson: Elena is going to have a dark side. Elena’s dark side will crave him. I think she would be a little scared that he wouldn’t love her then cause she might be too much like Katherine. But Damon will prove to be the right brother cause he will prove to her that she’s not like Katherine. he has zei they have meer in common but Elena would never be her since she refuses to sleep with both at the same time.
predann, TheExcorcist and 6 others like this
ggdelena she said this isn't right and then he said it's right just not right now and that was after the kiss
Nutika I liked your explanation but it's not the end of delena songs :D
lovesobrev i have read this on tumblr too still love it ahhhh delena my love
16
White and Black simbolism of the new pictures of Nian and Pina
posted by Ianrocks
Okay I was really thinking and eyeing the Nian and Pina (Nina and Paul) EW picture. @Laynaa asked if anyone thinks there's a reason that Nian is White and Pina is Black.
I looked it over and did some searchings and thinking on the subject.

So I think for DE it means: that their relationship is pure. True relationship is absolutely free from self interest. It is always dedicated with no expectation...
continue reading...
7
The Hunters: Phantom Sneak Peak *Spoilers, but absolutely worth reading*
posted by TVD_rocks
Here's a short Sneak Peak of The Hunters: Phantom that I've noticed at the end of Stefan's Diaries. I'm not sure if it's in the end version of not but I do think it's a very cute scene between Damon & Elena.


Elena Gilbert stepped onto a smooth expanse of grass, the spongy blades collapsing beneath her feet. Clusters of scarlet roses and violet delphiniums pushed up from the ground while a giant canopy hung above her, twinkling with glowing lanterns. On the terrace in front of her stood two curving white marble fountains that shot sprays of water high into the air. Everything was beautiful,...
continue reading...
11
Don't give up hope Delena Fans!!!!
posted by Lostie58
Ok I really really need to get this off my chest. I strongly beleieve that a lot of u are giving up way too easily. u guys are seriously giving up because of one Stelena scene. I mean the scene could have been worse, Elena could have zei something like "I will always love you, Stefan." instead she just zei "I love you, Stefan." I mean I really think that says a lot meer than u think. The phone scene ia a lot like all of their other scenes too. Do u really think Elena is just going to stop loving stefan just like that. She needs to see what he is really like (his rippah side), and...
continue reading...
9
The Series finaly of the vampire diaries commercial.
posted by Ianrocks
This is just my idea on how the writers will do a commercial with the finaly episode.The words in parentheses is the annoucers voice. And yes I know, way to early since they haven't started season 3, but I just had the idea.

(It's the end of the series! And it's time to pick)

Bonnie, Elena, and Caroline are sitting somewhere
"I don't know who to choose" Elena says
Bonnie smiles and puts one hand around her shoulder "Just let you're hart-, hart guide you"

(What lenghts will the boys go to get her!)

Elena and stefan are in a bedroom.
"Elena, u should pick whoever u want." he touchs her face "But I'll...
continue reading...
13
Damon And Elena's First Kiss. (Elena's POV) <3
posted by Damon_Rocks
I smiled as i walked up to the Salvatore house and opened the door, Then i noticed the house was dark but there was loud muziek coming from the living room. I walked to the living room and there was Damon with his overhemd, shirt unbuttoned (A sight that took my breath away) dancing around with some collage girls. I felt like going and Killing the girls, Was i jelious? Im NOT jelious! I kept repeating in my head but i knew the truth, I was jelious! Damon must he sensed me there because he went and turned the muziek off and told the girls something Then they went to sit on the couch. He walked up to me...
continue reading... 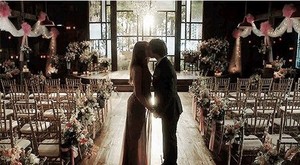 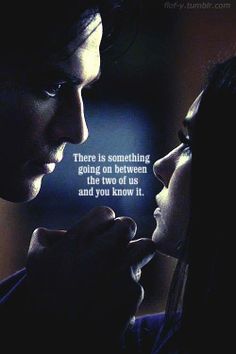 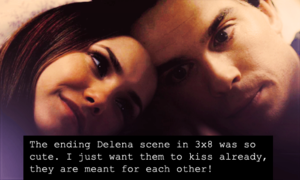 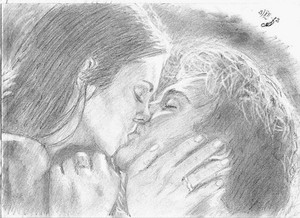 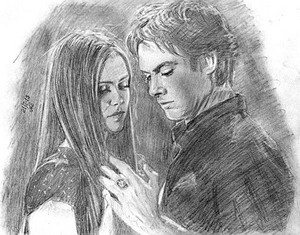 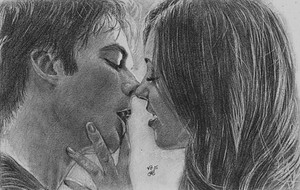 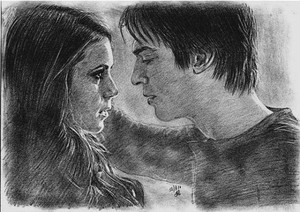 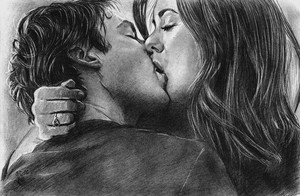