een jaar geleden simpleplan said…
i agree with you 100%

een jaar geleden AshFangirlLisa said…
I completely agree. I dislike the way Ash's new VA portrays him in the D/P episodes. Ash is supposed to be a young-boy, but his new voice makes him sound completely different, making Sinnoh Ash essentially a different character. In comparison, Ash's original voice fit him A LOT better, because it was more unique and natural. He felt more like a young-boy in the old seasons, because of the energy that Veronica Taylor gave him! I miss his original voice! =(

een jaar geleden AshFangirlLisa said…
Yay! I'm glad you agree with me! By the way, have you signed the online petition yet? Here it is, and please sign with your first and last name. :) link

een jaar geleden AshFangirlLisa said…
@simpleplan Haha. You're kidding me right? Of course Veronica Taylor wants to return to Pokemon! She LOVED voicing Ash! In fact, every time someone asks her about this at anime conventions, Veronica always says that she'd love to voice Ash again, but she hasn't been given the opportunity yet... And that makes me wanna cry, because it's so sad. =( I mean, they aren't giving her this chance. And I personally think she deserves it (because she worked on Pokemon for 8 years, the first 8 seasons of the show). I also feel bad for Veronica, because I know how much she loved voicing Ash. And it really breaks my heart that the Pokemon company is treating her this way. ;_;

een jaar geleden pumpkinqueen said…
I like his new voice better, he sounds like a grown up not a little kid. Don't get me wrong I love Ash's old voice. But Ash looks older and if they gave him the same voice it would be weird. The new voice fits him better and I think people are over reacting to this voice thing.

AshFangirlLisa: The character has not changed just the voice. The voice doesn't make the character. I think you need to give this new voice A chance and just love the show. People are making themselves hate the new episodes because of Misty not being in it or the voices. It's just stupied, I love Pokemon with all my heart and I'm not going to hate it for stupied reasons. I know the lady wants to voice Ash agian, But I don't want the voice to go back to how it was, it would be stupied. The voice sounds perfect. I think this new girl is doing a wonderful job on Ash's voice, she is making it sound similer to the old one. But making it sound like Ash has grown up.

een jaar geleden AshFangirlLisa said…
Over reacting? Well, no offense, but many Pokemon fans like me grew up watching the show with the orignal voices. And we loved them. The VA change was very unexpected and it seemed unnecessary!! So, yeah, needless to say, a lot of fans are very attached to the original vocies. I honestly don't see anything wrong with that, or preferring the original voices in general.

Anyway, everyone has different opinions about the voices, so it's okay that you prefer Ash's new voice.

I, however, like Veronica's voice best. I feel that voice fit Ash perfectly, because it was more natural and unique. And Veronica made him sound like a REAL kid. Not just an anime character.

Also, let me explain what I mean. I personally believe that a voice actor brings the character to life. So therefore, to me, when the VAs change, that DOES change the characters in a big way because their personality is different. To me, different voices = different characters = different show. That's just how it is for me though. :P

And by the way, the "give the new voice a chance" thing doesn't apply to me. I've actually seen seasons 9 through 13. So I've seen all the new Pokemon episodes with Sarah's Ash. Therefore, my opinion on Sarah's Ash voice is based upon what I've seen, with her performances. Generally speaking, I honestly don't see why people are saying Sarah's Ash voice is similar to Veronica's. Sarah's Ash voice sounds NOTHING like Veronica's. O_O Well, at least not to me. Anyway, basically, Sarah just doesn't meet my expectations for a "sound alike" VA. And that's because she doesn't sound like Veronica at all. So, rather than trying to imitate Veronica, I think Sarah is just giving us her own interpretation of the role. Which is fine, of course. But personally, I just dislike Sarah's portrayal of Ash. It feels too different for me. =P

Don't get me wrong, I'm not saying that Sarah Natochenny is a bad voice actress. In fact, I think she has improved a lot, and in Sinnoh League Victors she is doing a very good job. However, no matter how good she is, I simply like Veronica's portrayal of Ash better. Because that is the voice I'm used to hearing, not Sarah's. But of course, this is just my opinion. ^^

I like Ash in both the new & old episodes..just not when he calls Team Rocket Losers which is in the Johto and once I believe in the Orange Islands,talking about voice actors,I don't really like his new voice..it's sounds uh..well awkward,compared to his old voice,I think Veronica Taylor was a better fit for Ash than Sarah...not that I don't like his new voice..I mean it's okay,just not as good the old..I would LOVE to know why 4Kids changed Ash's voice actor! or in this case actress..this is just a random thought if female's can do do guys voices,why can't guys do female voices in cartoon/animes!? :P

and I just noticed: You Spelled Kanto with an e instead of a :P 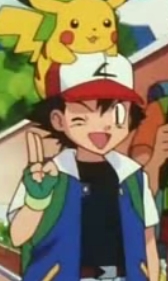 I respect your opinion, everybody loves Pokemon for different reasons. All that really matters is that we all love the show :) The only voice I argee made the character is James, I want James's old voice back. This new guy can't do James's girly laugh :( It's not the same, I remember watching the old episodes as a kid. James always made me die of laughter. My little sister and I are watching the old ones right now and anytime James laughes or does anything funny, we are in the floor laughing. 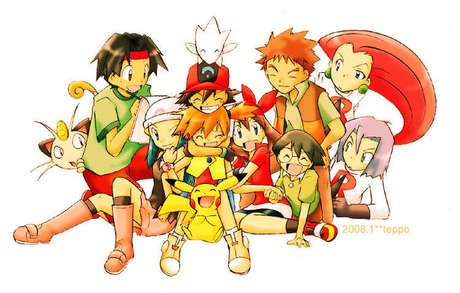 which makes me wonder who will do Ash's voice in the Isshu? :/(I don't like the name Unova,and I refuse to call it that :P)

een jaar geleden AshFangirlLisa said…
Unfortunately, it seems like Sarah Natochenny will still be voicing Ash in season 14 (Best Wishes). On Twitter, she hinted that they were recording season 14... =O

een jaar geleden AshFangirlLisa said…
Me too. x_x It's been 5 years since the VA switch. TPCi needs to bury the hatchet and just let Veronica Taylor return. They need to give her a chance to regain her original role as Ash.

^ As Much as I don't like 4Kids,I wouldn't mind them taking back Pokemon,because Veronica Taylor was pretty great as Satoshi/Ash,and I can't stand Sarah,her voice makes me cringe literally,I practically resent TPCi. >-> the only voice actress I didn't like on 4Kids was Amy Birnbaum..or however you spell it >->

een jaar geleden pumpkinqueen said…
I'm sorry but I really don't want the old voices back, I like the new ones better. The only voice I want back is James's old voice, but I'm still fine with his new one.

^ Everyone has their own opinion on things and I'm cool with that! =3

Thanks, I'm glad you aren't mad at me like most people.

een jaar geleden AshFangirlLisa said…
^ I'm not mad at you either. Everyone has different opinons about the voice acting.

However, I do find it a little strange that you grew up watching the old episodes and somehow came to prefer the new voices. You have a very unique opinion, lol. But anyway, to each their own. =3

een jaar geleden AninditaS said…
I had never thought that Ash's voice was a female,i came to know it frm 'behindthevoiceactors'.I was just so SHOCKED 0_0
But it was so great to know that females can do so Great voice acting!!
Ever since,i wanted to know more about Veronica Taylor & Sarah Natochenny!
But i always have liked Veronica more^^cos she's the one i hv heard for the long 8 seasons and the day when I watched the first episode of Battle Frontier-'Fear factor Phony' my ears just stucked when i heard someone else's voice doing Ash,and I cried out after watching the episode D;
i really used to hate Sarah those days bt now she's b'ter than before,bt Veronica vl always b the best to me^^
though Sarah is ok BUT I wud luv if Veronica comes back!!
Wooo hooo!! :D