30 Reasons Why Alyas Batman En Robin Is Amazing
posted by whatsupbugs
In 1991, the world was gifted with the release of Alyas Batman en Robin, a Batman parody from the Philippines. The film has gotten very little attention and love in America, but I've fallen in love with it. In the past thirty years, we've gotten far meer superhero films than there's ever previously been. While lots of people adore the serious, sophisticated and dark films we've been getting, I desperately crave the eccentric appeal of the campy superheroes. I know that Alyas Batman en Robin isn't a serious film with a deep story, but there's nothing wrong with that. Films are classified as...
continue reading...
Alyas Batman en Robin Movie Cast
posted by whatsupbugs
When people think about the actors and actresses who have played the Batman characters, they likely think of the 60's Batman cast and the cast members from the various cartoons and films that were done door Warner Bros. I believe that all the casts are significant and worth celebrating, so it's my honor to highlight the cast of Alyas Batman en Robin.

Alyas Batman en Robin was a film that was scheduled to come out in 1989. However, Warner Bros. feared the film was trying to compete with their own Batman film that they had coming out that year. Alyas Batman en Robin was not officially made with...
continue reading...
Why The Classic Batman Needs To Make A Comeback
posted by whatsupbugs
I miss the days of Batman. u might be wondering what that means, because there's plenty of new Batman content. However, I'm not talking about the dark, violent, anti-social vigilante who fights a clown that was disturbingly violent. I'm talking about the bright, heroic, fun superhero who fought a clown that was delightfully goofy. When I see people talk about who Batman is and what he's about, they usually describe the darker Batman from recent decades. It's sad to hear that, because that's not the Batman that Bill Finger created.

In Batman's first year, 1939, he was a dark vigilante. However,...
continue reading...
1
The Live-Action Batman Films Ranked From Least favoriete To favoriete
posted by whatsupbugs
I'm not exactly subtle when it comes to the fact that I love Batman. He's one of my favoriete heroes. I love his rogues gallery, comics and shows. Also, I'm a big fan of Batman's movies. If u count animated films, Batman's appeared in over three dozen films! Ranking all of those films would take meer time than the Clock King can give me, so I'll just be ranking the live-action films.

Warning: In order to properly discuss some of these films, I will have to give spoilers.

This ranking will just be for official Batman films, with one exception gegeven to a film that I loved too much to exclude....
continue reading...
All-Star Batman and Robin: Is It The Worst Batman Comic Ever?
posted by whatsupbugs
All-Star Batman and Robin, the Boy Wonder is a ten-issue series, that was written door Frank Miller. Frank Miller is a beloved writer, who wrote some critically-beloved Batman stories, including Batman: jaar One and The Dark Knight Returns.

I think jaar One, for the most part, is a compelling and emotional story, about Batman and Commissioner Gordon first jaar at cleaning up Gotham's crime. Plus, the story introduced Carmine Falcone, who is a fascinating and complex villain. The Dark Knight Returns is often considered to be the best Batman story ever made. While I can't deny that the story has...
continue reading...
1
another marvel/dc
posted by arrowone
batman: oh come on, bryce dallas howard! give me a kiss

bryce: I can't. Don't get me wrong Christian. We can still hook up and all that but...I'm seeing somebody.

batman: Oh this oughta be good. Someone better then me, huh?

batman: seriously, babe. Unless you're getting it on with RoboCop, I don't think I have anything to worry about. Neither does arrowone.

Right then Spider-Man appears with flowers.

Adam West returned to playing Batman in 1977. He voiced Batman in "The New Adventures of Batman", which also had Burt Ward voicing Robin. The toon lasted 16 episodes. The toon was done door Filmation.

Adam West got to play Batman in live-action, for the last time in the 1979 TV special, Legends of the Superheroes. It was also the live-action...
continue reading...
1
"BATMAN V. SUPERMAN: DAWN OF JUSTICE" (2016) Review
posted by DR76 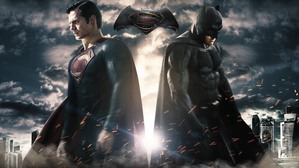 Following on the heels of the success of 2013's "MAN OF STEEL", I had expected the Warner Brothers Studios to follow up with another movie about Superman, starring Henry Cavill. To my surprise, the studio had announced another movie featuring Superman, only the comic book character would be sharing top, boven billing with another from the pages of D.C. Comics.

5. This film's versions of the heroes are well done.

I think that George Clooney's version of Batman actually works well. People have compared it to Adam West's Batman, but I think that it's good that there are things in common between them. Mr. Clooney has the same wholesome charm of Mr. West. Mr. Clooney's Batman took the silly stuff going...
continue reading...
1
"BATMAN BEGINS" (2005) Review
posted by DR76 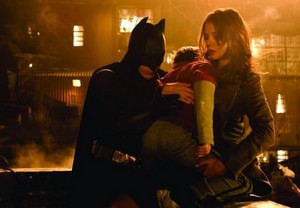 When Christopher Nolan’s reboot of the BATMAN franchise first made its debut during the summer of 2005, many critics and moviegoers hailed it as the seconde coming. They also viewed it as a vast improvement over the four films released between 1989 and 1997. Since then, ”BATMAN BEGINS” has been overshadowed door its 2008 sequel, ”THE DARK KNIGHT” and 2012's "THE DARK KNIGHT RETURNS". After a recent viewing of the 2005 movie, I must admit that I have a deeper attachment for it.

”BATMAN BEGINS” was basically an origin tale about the scion of a wealthy...
continue reading...
You Might Also Like...

Michael Caine
My Ranking of the Batman Actors
posted by mrcodegeass
Batman has been the ster of various shows and films. In addition to that Batman has been played door several different actors. This lijst is about my ranking of the live action versions of Batman.

Despite how hated the film was I think it's lots of fun. However I'm not a fan of George Clooney's Batman. Since the film was a odd mix of action and comedy it was hard for Mr. Clooney to play Batman well. A lot of critics think that Mr. Clooney wasn't enjoying his role in the film which I agree with. Thankfully he's very kind about it and has even zei he was sorry...
continue reading...
1
BATMAN ADVENTURES #8 (BY:ZAK BECK)
posted by zakbeck
"LAUGHING KILLS" IS THE titel OF THIS ONE.


MASTER BRUCE ARE u ALMOST DONE WITH YOUR SHOWER. YES I AM ALFRED.AS I CAME OUT WITH A TOWEL AROUND ME.WELL VERY GOOD MASTER BRUCE,BECAUSE IT'S ALMOST TIME.SAID ALFRED.ALMOST TIME?TIME FOR WHAT ALFRED.I ASKED.FOR THE AWARDS CEREMONY OF THE SHELTER HOME.AND u DID DONATE QUITE AN AMOUNT SIR.ALFRED SAID.WELL I GUESS FOUR GRANT IS QUIET A LOT ALFRED.I SAID.THEN A uur LATER I WAS ALL DRESSED UP IN A NICE TUXEDO WITH A CORSAGE.AS ALFRED WAS PUTTING THE FINAL TOUCH.A TIE AS HE TIED IT ON.MAKING IT PERFECTLY TIGHT.THANKS ALFRED,AND HAVE A GOOD NIGHT OLD...
continue reading...
The Time That Bill Finger Wrote An Episode Of 60's Batman
posted by whatsupbugs
Bill Finger used to be unknown, but nowadays, he is known as the co-creator of Batman. Bill Finger wrote the earliest Batman comics in 1939. He continued writing Batman comics throughout the 40's and 50's. While Bob Kane came up with the initial ideas for Batman, I believe that Bill Finger is the one who gave Batman his moral integrity and unique charm.

Bill Finger wasn't created for his work in comics, but he was created for his televisie work. Bill Finger had the honor of getting to write a two-part adventure for the 60's Batman televisie series. He co-wrote the episodes "The Clock King's...
continue reading...
Scooby-Doo Meets Batman Review
posted by luthorlex
Scooby-Doo Meets Batman is a 2002 DVD that has the 2 episodes of Scooby-Doo that have Batman. The episodes were made in the 1970s.

The Dynamic Scooby-Doo Affair has Scooby-Doo and his vrienden meeting Batman and Robin. They try to stop a crime involving a mysterious and new villain who has a money scheme. The episode also the Joker and pinguïn who cause the heroes trouble in their Fun House.

The Caped Crusader kappertje has Scooby-Doo and his vrienden teaming up with Batman and Robin again. The Joker and the pinguïn plan on stealing Professor Flakey's flying suit.

I love the 2 episodes....
continue reading...
The Right And Wrong Way To Write Batman
posted by whatsupbugs
Batman is one of the most populair fictional heroes of all time. Because of this, people have different opinions on how the Batman character should be written and represented as. This artikel is about my personal opinions about how Batman should be written.

The Right Way To Write Batman:

In the past, I have gone into great detail about why Bill Finger is the true creator of Batman. However, I believe that Bill Finger is more...
continue reading...
1
"THE DARK KNIGHT" (2008) Review
posted by DR76 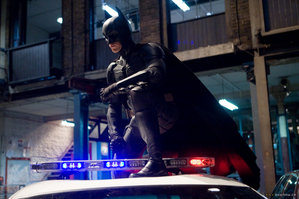 In 2005, director/writer Christopher Nolan rebooted the Batman franchise with the highly successful movie, ”BATMAN BEGINS” that starred Christian Bale as the Caped Crusader. Both men have reunited three years later for a new story centered around Batman’s conflict with his greatest nemesis, Joker in this 2008 sequel called ”THE DARK KNIGHT”.

There has been a great deal of attention surrounding this movie. Many have not only praised it, claiming that it is better than the 2005 movie. But most of the word-of-mouth had centered around the late Heath...
continue reading...
6
The 20 Most Ridiculous Batman Comics Ever Released
posted by hm94991
Through 70 years of publication, Batman has braved many adventures that push the limits of the imagination.

These are the stupid ones.

(Side note: This artikel has been rated pg13, and should not be read door anyone younger.) Enjoy. :) 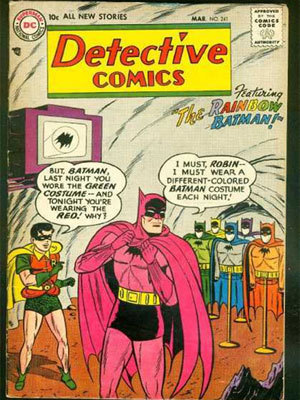 This is what happens when Batman is written door Liberace.

Also, Robin can call it red all he wants, but according to our Crayola box set, Batman's costume is actually pretty-princess-pink. 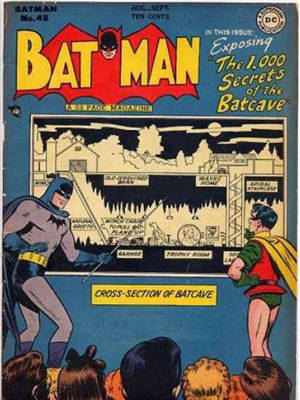 "And that concludes our presentation of the Batcave. Any questions? Yes, u the kid in the back."

"So your bat-cave is right under...
continue reading...
1
marvel/dc yo
posted by arrowone
Captain Stacy: Hi I'm a Marvel
Gordon: ...Hey what are u doing here at Commissioner Loeb's funeral?
Stacy: I'm coordinating it! Alright, first things first. The Joker threatened to kill our beloved mayor, so for the funeral, I think it's best to have it in a location with an obscene amounts of windows.
Gordon: ...but what about sharpshooters?
Stacy: Please. We're doing our job.
Gordon: No you're not doing your job. At DC, we get to the bottom of the matter. Like detectives. We're not here to let people off with a warning in order to set good examples for children
Stacy: Yes clearly from watching...
continue reading...
1
When i became a Batman fan
posted by MoniBolis
When i was 5 years old i ask my father, who did he like better Batman of Superman?

He answer Batman. So i ask why Batman, he doesn't have superpowers he is just a guy.

My father response was: "That's exactly why. He is just a guy, but a really tough guy. He punches the bad guys, he has cool gadgets, and he never gives up"

Something click in my mind and i been a Batman fan ever since.

I watch the cartoons, the movies, and when i got older the comics.

So how about u guys? When did u became a Batman fan 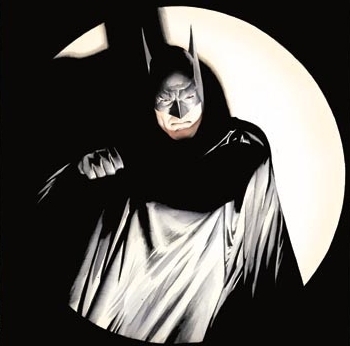 Batman Forever/Batman and Robin: Joel Schumacher's Underrated Duology
posted by whatsupbugs
When Batman fans discuss their favoriete Batman films, Tim burton and Christopher Nolan's films are brought up. However, it's rare to see that level of admiration for the two Batman films directed door Joel Schumacher. For a long time, I've considered both of his films to be underrated.

The Backstory and Reception of Batman Forever: