7
MJ Fantasy- Life is Like a Love Song (Part 4)
posted by MrsJackson96
While they were watching E.T., the most cliché thing happened; Michael and Brooke both went to grab some popcorn at the same time. As their hands touched, their hearts raced. They looked at each other and smiled. Michael grabbed hold of her hand and put his arm around her. Pulling her in close until she was lying on his shoulder, “Brooke?” Michael whispered.
“Yes Michael?”
“Um... Don’t worry,” Michael said, seeming unsure about whether he should ask her a vraag of not. Brooke sat up and looked in to Michael’s big, brown eyes,
“What is it Michael?”
“Um, well I just wanted to know... do u like me?”
“Sure I do,”
“No, I mean... do u LIKE me?” Brooke couldn’t believe it. Michael Jackson, the Michael Jackson was actually asking her if she liked him. Naturally, of course, she didn’t need to think about it, but what had escaped her mind were the nerves...
“I, umm... well I guess I... umm... I... Yes. Yes I like u a lot, Michael. Is that weird?”
“No no, I’m actually relieved. ‘Cause I really like u too.” Brooke stared at Michael in amazement. He held her face in his hands and said, “You know, you’re the only girl I know that I have ever been able to watch anything like this with. u really are unique, and I love that about you.”
“Really? Well I don’t see why they wouldn’t like them. I mean, they’re wonderful and really make u think like a child again. I think that’s why I love them so much,”
“Wow, me too.”

After E.T., Brooke and Michael talked through The Three Stooges, Cleopatra, and 3 Charlie Chaplin films until 1am. Time had completely escaped them. Michael had stayed awake through all of it, but Brooke had fallen asleep half way through the Charlie Chaplin movies. Michael hadn’t realized she was sleeping until her head fell onto Michael’s shoulder. Trying not to wake her up, Michael slipped away to turn off the T.V. He picked Brooke up in his arms and carried her to the guest bedroom. He laid her down on the bed, pulled the sheets over her body, kissed her on her forehead and whispered, “Goodnight beautiful” to her.

The volgende morning, Brooke woke up, having no idea where she was. She sat up in the bed and rubbed her eyes. Suddenly there was a light knock on the door. As it opened, Brooke could see Michael’s head in the doorway. Once he knew she was awake, he walked inside and said, “How are you?”
“I’m fine,” she yawned back, “Where am I?”
“Don’t worry; u fell asleep last night, so I carried u to my guest bedroom,”
“Oh my goodness, was I here the whole night? Oh I’m sorry Michael,”
“It’s fine sweetie; u look really cute when you’re asleep anyway,” Michael said, pushing Brooke’s fringe out of her face. She couldn’t help but smile. She put her hand on top, boven of his as he held her face. Michael let go of her face to hold her hand. They looked deeply into each other’s eyes. Michael into Brooke’s bright, green eyes, and Brooke into Michael’s deep, brown eyes. Michael wanted her so badly, and he knew she wanted him too. He slowly leaned towards her, put his other arm around her waist and kissed her very gently. Brooke held Michael’s hand tight, not wanting to let go. Michael rested his forehead on hers, smiled and whispered, “Good morning beautiful.”

“...Look Mike, all I’m saying is that u shouldn’t beat yourself up over this, keep the faith man, she’s out there somewhere,”
“Somewhere could be miles away...”
“OR... it could be in this very building. u just never know.”

Michael sighed in agreement and told Matt he was ready to record again. Just then, a knock on the door interrupted Matt from responding to Michael. It was Brooke. Knowing Matt was in the room, she had come prepared with a hot cup of coffee for him. Michael got frustrated waiting for Matt to hurry up. He and Chris stood up to see...
continue reading...
6
this is it
posted by natasajackson 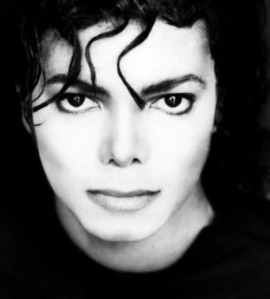 This is it, Here I stand
I'm the light of the world
I'll feel grand
Got this love, I can feel
And I know, Yes for sure
It is real

This is it
I can say
I'm the light of your world
run away
we can feel
This is real
Every time I'm in love that I feel...
continue reading...
4
June 25th, 2009
posted by Waterwhip 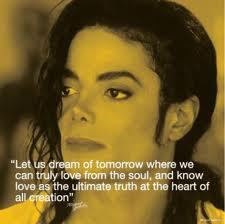 We all remember the dag we dread most. For me and many others, that June 25th, 2009 which door the way if getting closer door the second. I dont know if I'm ready for all of it. Living in the area I do, the hate people have for Michael is already unbelieved. I'm not ready for the sighns around town saying "Happy 25th of June! Little boys can sleep veilig once more!". I'm not ready for the greiving of my vrienden and partys around town with people wearing anti-mj shirts. I'm just not ready. I do hope I am not the only one. We need to be there for eachother on the days we dread most. 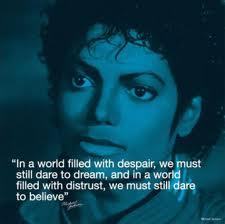 1
why i like the Invincible and HIStory Era
posted by awsomegtax
YES!!! I LOVE THRILLER but come on thriller thriller thriller lets have a dif fav era for once hehe. ok so i do love the thriller era yes probably ALLOT but my fav's are invincible and history why cause he had a more....mellinium and upbeat like a sorta futureristic pop muziek sound that just hung on me like all his albums not 1 mj song i hate. I like invincible cause it has beats that just make u want to verplaats not to menchon the beautiful and awesome slow songs on there i think mj put all his work into this album im sure. HIStory sorta explains how i feel and makes happy when im sad cause i know im not the only one whos lonely and gets made fun of cause of my looks of what. I LOVE ALL MJ ERAS xD
6
Michael Jackson 2001 Vibe Interview (Part 1)
posted by HeavenlyRose 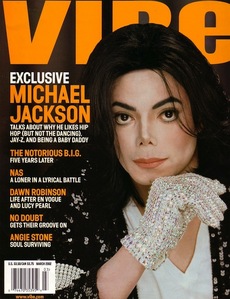 VIBE: How does it feel to be re-entering the market and competing in sales with likes of ‘N Sync and Britney, kids who were being born at the height of your fame?

What are your thoughts on the current state of R&B?

Iris's hands balled into fists. Forced tears rolled down her cheeks. She swallowed hard and was ready to face the one person who had taken dancing away from her forever.
"Miss. Virgin? Someone's here to visit you." The nurse— who had been oh so sweet to Iris— smiled brightly. Iris merely nodded and motioned for the person to come in.
"Iris Virgin," The child-like voice grew stronger as the person walked into the hospital room gracefully. He was wearing nothing but black, but it suited him well....
continue reading...
7
Michael Jackson's children 'want to buy back Neverland' :DD
posted by Reis7100 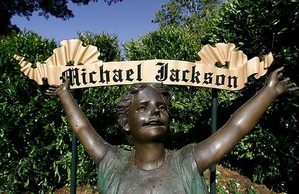 Prince Michael, 13, and Paris, 12, are zei to want to turn the ranch into a shrine to their dad after having made a secret pilgrimage to the late singer's £50 million home.

Jackson, who died in June last year, was forced to sell the sprawling ranch after losing control of it to an investment company when the King of Pop fell into debt, according to the News of the World.

A bron told the newspaper: 'Paris and Prince remembered the rooms from their childhood.' 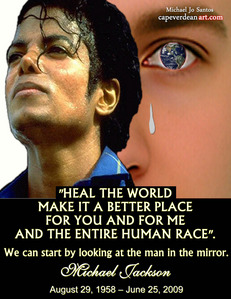 Hello everyone!! i seriously want everyone to read this something i want everybody to read...

i came across this fan picks' vraag and i know most of the people have and 'who do u think could be the best rapper featured in mj's song'?

and 2pac was voted.....but for this is for those who don't know what 2pac zei about Michael...

copy paste this url and watch 2pac give the hints that Michael Jackson never gave anything to charities and that he thinks he's a white man!!!

I seriously don't think 2pac should be voted and not even Eminem and MC hammer!!
I just don't wanna hurt any 2pac fans here....i do know that 2pac was the best rapper. it's just that 2pac shouldn't have zei anything of that sort. 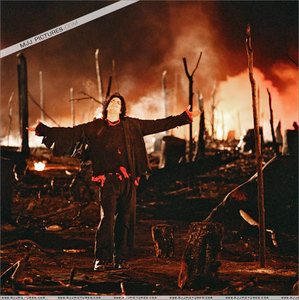 What have we done to the world
Look what we've done
What about all the peace
That u pledged
your only son...
What about flowering fields
Is there a time
What about all the dreams
That u zei was
yours and mine...
Did u ever stop to notice
All the children dead...
continue reading...
Man In The Mirror lyrics
posted by spiritace
Ooh ooh ooh aah
Gotta make a change
For once in my life
It's gonna feel real good
Gonna make a difference
Gonna make it right

I'm starting with the man in the mirror
I'm asking him to change his ways
And no message could have been any clearer
If u wanna make the world...
continue reading...
9
"We Love u Michael" door James Gibbs
posted by Beatit
We love u Michael came from the crowd
They were on their feet and they were loud
Besides feeling great joy I was very proud
As the smoke faded into a dissipating wolk
His brothers left and there was just him
Still looking witty, smart and trim
He was still an absolute rock and roll gem
And he had that R and B soul inside of him
He broke out with a favorite: "Billie Jean"
And from all over there came a great scream
It was like being in some kind of dream
He did the moonwalk and the moonwalk was mean
Again we love u Michael came from the crowd
He had emerged into the light from a very dark...
continue reading... 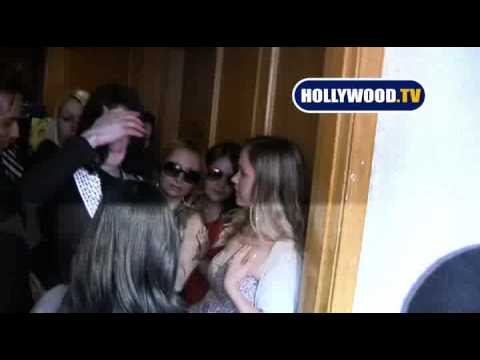 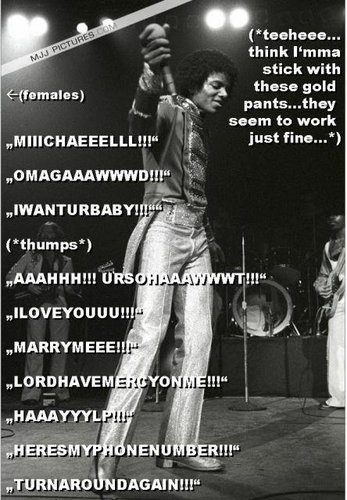 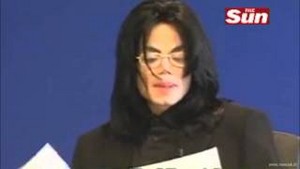 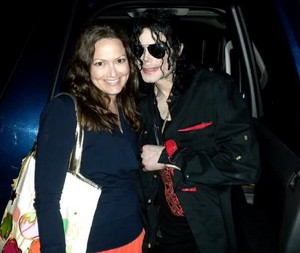 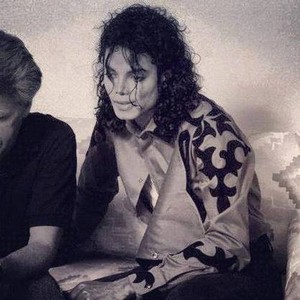