My Chemical Romance What are your fave MCR quotes?

i loved it when ray put his hand in a cupcake! that was funny!

"There is less violence in the world when people are using hula-hoops." -Mikey Way

"I am allowed to be sick of seeing my face, cuz its my fuckin' face!" -Gerard Way

"Frank: "Has goldfinger ever had a flock of mooses advancing on him? It's a terrifying sight."
Mikey: "That's not the plural of moose, it's moosi."
Gerard: "Fuck off, it's meese.""

just a few of my favorites! lol

(Referring to the Skeleton gloves) "Gerard makes me wear these constantly..." ~ Frank Iero

(At LeATHERMOUTH concert) "Thank you guys for getting off the messaging boards and coming out to the real life..." ~ Frank Iero

Mikey:"My biggest fears would be ghosts, um, deep water, and
sharks."
Gerard:"But..."
Mikey:"But my favorite movie is JAWS so..."

There's more but I can't remember them at the moment...

LOve this too :D

" IF YOU DON'T COME OFF THE STAGE FEELING COMPLETELY DRANINED OF EVERYTHING YOU HAVEN'T BEEN DOING IT RIGHT." - FRANK IERO

Gerard Way: We have a muscle car with a spider on it, we have fucking laser guns!!

een jaar geleden Fallintomyarms said…
"I'll take this time to work on my solo project, its all song about Gerard. OH GERARD YOU MAKE MY HEART BURN!" -Bob

"when something is horribly broken or out of order... "That shit got Newark-ed" "-Frankie (haha, totally love this)

I almost forgot this!!!

"Shit, they got me. Im officially verified. (Frantically rereading past tweets and deleting.)"-Frankie (From Twitter) haha..this is really lovely..

Frank: "I wish it were Popsicle."
Gerard: "Popsicle?"
Frank: "I wish Popsicles were the new black. That way everyone would have one."
Mikey: "I like popsicles."

Hey, do you guys think that MCR ever looks at this stuff? I think they would love it lol.

een jaar geleden disenchanted-x said…
^ I think it would be amazing if they looked at this, though creepy. since we're quoting some things they said from years ago. :B

"Stay beautiful. Keep it ugly."
"Coffee is something that my body is now physically & mentally addicted to."
"Don’t do anything to try to fit in."
"Art is doing something you really believe in."

Best Heartfelt Quote:
"Sometimes you have to kind of die inside in order to rise up from your own ashes and believe in yourself and love yourself in order to become a new person." ~Gerard Way

I believe this quote refers to when he was drunk and on drugs, he believes that this helped him become a newer, better person. It basically states to you should learn from your mistakes; in order to learn you must make some mistakes.

Second To Best Heartfelt Quote:
"One day your life will flash before your eyes. Make sure it's worth watching." ~Gerard Way

He is simply stateing that you should do something of value with your life so that when you are older you will not regret it.

Best Funny Quote:
"So people keep asking me what this badge is for... this badge makes me the sheriff, the sheriff of emo town, so get your straight irons and eyeliner ready!" ~Gerard Way

Second To Best Funny Quotes:
"I'd rather be a creature of the night than an old dude." ~Gerard Way

"I want to be a vampire. They're the coolest monsters." ~Gerard Way

Best Funny Conversation Quote:
Fans: *Chanting in German* YOU HAVE BEAUTIFUL HAIR!!!
Gerard: You guys have a seriously agressive chant just for that!?

Second To Best Funny Conversation Quotes:
Fan: Can you say, 'I love Charity?'
Gerard: Uh... Is that a person?
Fan: It's me!
Gerard: Oh! I love Charity!

Interviewer: What kind of products do you put in your hair?
Ray: Sweat and beer. I never wash it.
Mikey: I never wash my hair either, man!

Fan: Can I tuch your hair?
Frank: No, that's wierd!

Best My Chemical Quote ever... 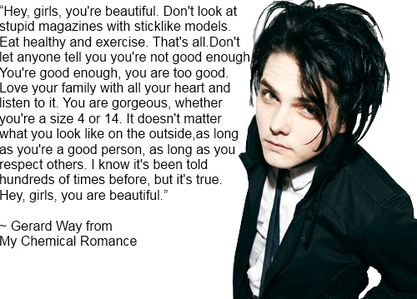 een jaar geleden 2ntyOnePilots said…
AAAHHH THIS FORUM GAVE ME LIFFFEEE!,!
Ok I’m calm
Wait.... did they miss... this is Blasphemy! I need to fix it!

WE GOT OUTA THE VAN AND THIS DUDE BY A CRACK HOUSE YELLED AT ME ‘BETTER STAY ON THAT SIDE OF THE STREET MOTHAFUCKA! IMA KNOCK YOU OUT!!!’
-Gee

Cannot believe this iconic art was left out. *shuns*