Personality: She has a split personality. A majority of the time, she's hyper, sweet, bubbly and just like her good friend Honey-senpai, but when she gets upset, she becomes cold, distant, and often hostile if you bother her. She's always been loyal to her friends and family, and like her close friend, she is small for her age and has a strength you simply wouldn't know was there just by looking at her, so don't be mean to her friends, family or her puppy Cookie if you know what's best for you. She and Honey share a love of cute things and sweets, but Yuri is also a thrill-seeker, and likes the feel of a good adrenaline rush. She's a friend to all living creatures, and if she sees anything bad happen to an animal of any sort, she's certain to take action. She doesn't think things through most of the time and usually acts solely on emotions, but when she actually takes time to think about what she's done, she'll go back and correct it if she feels the need to.

Likes: Sweets (chocolate, ice-cream, brownies and cookies are her top favorites), thrill rides, pranks, the beach, Honey-senpai, Haruhi (she looks up to her), her little dog Cookie, fashion (to a certain extent), flowers, rainbows, and all animals--especially the cute ones!

Past: Yuri and Honey-senpai's families were similar and very close, so they got to see each other almost every day when they were young. In spite of the two being best friends, Honey-senpai didn't know that Yuri's parents fought constantly. One night, Yuri tried to stop their fighting, but this resulted in her mother losing her temper and almost beating her to death. The woman was so ashamed and humiliated that she ended up running away from the Yokoyama household and was never seen again.

In response to this, Yuri went to Honey-senpai's home and begged to stay there; both of their fathers agreed and Honey-senpai's father had him train her in martial arts so what happened with her mother would never happen again. She eventually became as dangerously strong as Honey-senpai, but that didn't stop her love of cute things, sweets, animals and thrills anymore than it stopped his. They now attend Ouran Academy together, and she is a frequent visitor of the Ouran Host Club; she's close to them to the point that she even knows the secret about Haruhi being a girl, and even helps as if she was a member herself so as to try and keep/help the boys and Haruhi out of trouble. 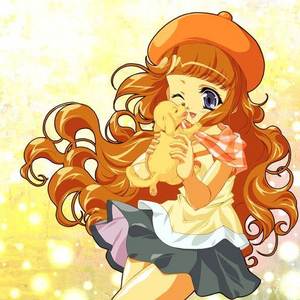 Personality: A foreign student of Ouran from the U.S. Speaks Japaneses but has trouble reading/ writing it. Shes a very sweet girl, but sometimes to sweet. Was taken controller of by a lot of people, which is why she left. Plays violin which got her a scholarship to Ouran. But at this school shes fighting to make sure things don't go the same as back home. Lives with Haruhi and knows her secret, but knows nothing of the Host Club until the first day of school. She finds herself very pretty but thinks that no one wants to talk to her, no one even knows she excite. She plays games and loves cake but will drive you crazy with they crazy things that come out of her mouth. She will scare you and be happy about it, she will sit in a corner and write for hours. And you will never know what goings on inside her head.

Favorite Host:Kaoru. She can tell them apart but sometimes get confused when they talk at the same time or do something not like them.

Past: Live in the U.S. with a happy family she loved. Mom, Dad three brothers two sisters all older then her. She became the last one in the house and her brothers and sisters came around less and less affine. So she relied on friends, bad friends. Ones that used her, and none she could trust. She grow trust issues and began to live her life though words on a paper. That was the only place she could get her words out because no one else would even lessen to a word she said. But she slow was going crazy and she knew it. She had to get out. Then one day she was at one of her violin assembles playing a solo. After a man talked to her about going to school in Japan for free, she thought it was her only escape from this life so she took it. By the time all the paperwork was done she was in her 2nd year. Same year as Haruhi, the twins <Kaour3 and Rangay. And just her luck, same class.
Something to say? Sign in with one of these options:
Log in to Fanpop! Not yet registered? Create a new Fanpop account!