2
The secret child!- Part 3
posted by skipperfan5431
As soon as Lilly dozed off, the guys came back from their late-night recon duty. " HELLO SKIPPA!" Private Yells jollyly (is that a word? oh well, it is now). Kowalski, seeing that Lilly was asleep, smacked Private up-side his little head. " Skipper, are u okay? u don't look very well." Private asked, rubbing the back of his head which was now very soar. " Boys, get to bed. I need some quiet time." Skipper zei softly. The boys didn't move. " That's an ORDER!" Skipper commanded, and with that, the boys jumped into their beds and automatically knocked out! Skipper sat in the scilence...thinking. ( I can't believe this is happening. How am I supposed to raise a hatchling? Does she have ANY idea how much of a scandal this could turn out to be? Im her commanding officer, and the boys don't even know were an item! What if I stink at being a dad..) Skipper looked up at his pregnant girlfriend. ( Ya know what!? I CAN do this, Because I-I......I LOVE THIS WOMAN!) Those words have never crossed Skipper's mind, and he never thought they would. He took one last glance at Lilly, and went to sleep.
--------------------------------------------------
THE volgende MORNING!!!!!!!!!!!!!!!!
Skipper woke his team up at the usual time, 3:00 am. He couldn't toon anything was amiss. " ALRIGHT MEN!!!! UP AND ADAM!!" Skipper demanded. Kowalski and Rico woke up with dark circles under their eyes, and Private had drooled a large puddle on the HQ floor. Yup that's what late-night recon does to ya! Lilly got out of bed as if it were a regular morning. " Morning gu--AHHHHH!" Lilly felt the horrible pain in her stomach and collapsed to the floor. Skipper became increasingly alarmed and ran to her aid. " LILLY! ARE u OKAY!? HOW'S YOUR STOMACH!?" He asked in a terrified manner. Lilly pointed behind Skipper, when he looked back he saw the boys staring at him in shock. " well....Skippa neva got that worked up when I got a tummy ache." Private whimpered. Feeling bad, Rico puked up a toffee, butterscotch lolly, handed it to poor Private, and patted him on the head. " Im fine sir, just---uh---cramps." Lilly explained while she brushed herself off. " Let's just go through our day." Skipper nodded and led the guys out of the HQ for their regularly schedueled activities.
--------------------------------------------------
LATER THAT DAY!!!!!!!!!!
Kowalski gathered Rico and Private into his lab for a little meeting. He didn't fell as if all was right with Lilly, and neither did they. " Don't u guys think theres something wrong with Lilly? She didn't participate in any workouts of missions today, and she's always vommiting!" Kowalski stated. " Yeah, and don't u think she's, well, gaining weight?" Private added. " Mabey we should take her to the doctor?" Rico regurgitated a giant needle and did a creepy-evil laugh. " No Rico, that's plan B." Kowalski corrected. Rico frowned and put the needle away. "Besides, Lilly's just like Skipper, she's waayyy too proud to admit she's sick, let alone go to the doctor." Just then, Lilly and Skipper walk into the HQ. " hallo boys!" Skipper cheered. What's going on?" The three penguins stare at Skipper wide-eyed and run out of the HQ. " What's wrong with them?" Lilly asked. "I have NO idea..." Skipper replied.
--------------------------------------------------
STILL IN THE HQ!!!!!!!!!!
Skipper and Lilly had a meeting too. " Are u sure your okay?" Skipper asked, referring to what happened earlier. " Yes Skipper, im FINE. The hatchling just kicked too hard. I swear, he takes after u a little meer every day." Lilly assured. " Wait? HE? How are u sure?" Skipper asked. Lilly put his flipper on her now buldging belly. " Trust me. I know." She replied with a smile. " So. When's 'he' supposed to...uh....pop out?" Skipper asked akwardly. " About a week from today." Lilly replied. Skipper's jaw dropped. "WAIT WHAT!!!????"
MsKowalski99 and urumica like this
urumica :D amazing!! part 4???? :DDD xD
skipperfan5431 Tomorrow Urumica. It comes TOMORROW! *or whenever I can steal my mom's computer!* XD!
GIVMEKINGJULIEN OMG I CANT WAIT!this just keeps getting more interristing!
urumica ^ ikr??? :D
The secret child! - Part 2: The confrontation.
posted by skipperfan5431
Lilly woke up soon after, holding her stomach. " u do know u have to tell Skipper about this. Right?" Gloria asked sternly. Lilly shook her head. " Yeah, I know. But I don't know how he'll take it."
--------------------------------------------------
LATER IN THE HQ!!!!!!!!!!!!
Lilly was on the floor, trying to wake Skipper up. "W-w-what happened?" Skipper asked dazily. Lilly looked at him. " Im pregnant." She zei bluntly. "Oh yeah." Skipper replied, then he fainted again.
--------------------------------------------------
2 HOURS LATER!!!!!!!!
Skipper wakes up YET AGAIN! " Will u STOP DOING...
continue reading...
I Work Alone (16. Three Sticks of Dynamite)
posted by Aquade
As I dodged a frantic grab from X, I glanced at the other penguins. We had certainly come far from our starting point. There was no doubt that we would beat X and get out of here. I launched a kick at X, but was batted away. He really was as good as they had zei he was. As I flipped to break my fall, I skidded around. "Any ideas?"

They all shook their heads. I turned to Skipper. "You zei that we needed some prayers, right?"

"It was a figure of speech!"

"It's the only thing we have!"

"Oh don't worry; I'm sure we've all zei meer than enough prayers to last us for a lifetime."

Skipper glanced at me doubtfully. "I have a feeling that I'm not going to like it too."

Kowalski turned his gaze on me. "What is it?"

I looked at Skipper. "This has something to do with the deal we made earlier. I'll distract X while u guys escape."

"Hey!" argued Skipper. "When I made that promise earlier, I didn't plan for this."

I glanced sharply at him. "We made a deal, so don't u tell me that you're going to back out of it."

We reached a dead end. I looked at them all in turn. "Don't u see? I'm not going to let another pinguïn die...
continue reading...
I Work Alone (14. Lives at Stake)
posted by Aquade
Just as I jumped into my room, I heard alarms begin to ring throughout the compound. I grinned to myself. Private and Kowalski must have finished letting everybody go. I glanced at the surprised faces looking at me. "Who wants to get out?"

Everybody yelled with joy. As I unlocked the different cages, I came to one with a squirrel. "You must be Fred," I said.

He looked at me. "Is the hotel stay over?"

I stared at him. He continued. "The room was okay, but the food is horrible. They don't even have acorns!"

I shook my head and decided to play along for the sake of everybody else. "We're having a...
continue reading...
I Work Alone (13. Relieving the Past)
posted by Aquade
"Does anyone besides me feel an odd sense of déjà vu?" asked Kowalski.

Skipper turned left just in time. The rest of us followed. "Thanks for trusting me," I said.

"Instinct," replied Skipper. "Years of military ordering programmed me to obey a direct order on the first thought."

Skipper glanced back at him. "Don't even try it, of I'll give u maintenance duty for a month."

He turned my gaze to me. "May I ask why u chose left?"...
continue reading...
I Work Alone (12. One, Two, Three)
posted by Aquade
The sun had set, and it was time for action. "Everybody set?" Skipper asked.

We all checked our equipment for the umpteenth time. "Yup!"

We all started to shake the soda bottles strapped onto our backs. The badges exploded, and we rocketed into the air. "Yahoo!" I yelled. "This feels great!"

Skipper smirked at me. "This is what flying feels like."

I grinned back at him. Our relationship had gotten better and better, much to the relief of the other penguins. "We were made for this!" I said.

I rolled over in the air. "Why didn't we do this before?" I was slightly hurt that...
continue reading... 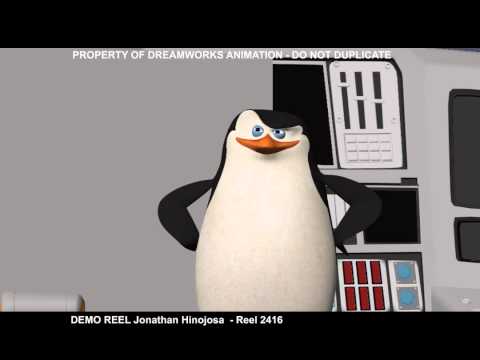 6
Penguins of Madagascar animatie - Demo Shot
added by mouseandowl
This is a demo of animatie from the movie.
video 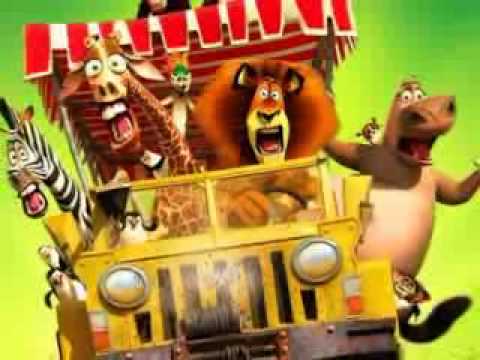 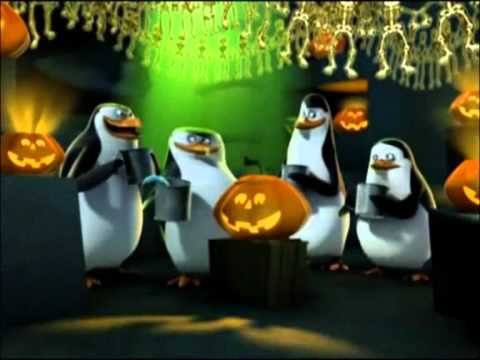 11
This is Halloween~Penguins of Madagascar
added by have64
I own nothing. I wanted to make something like this but... Already done. So thank the youtube user, GwinverArRouz. link
video
penguins of madagascar
skipper
kowalski
rico
private
julien
marlene
episode 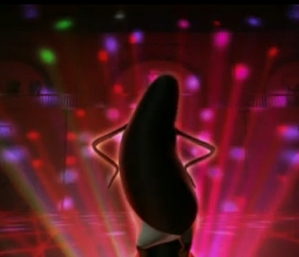 Learning the latest song that he heard on his portable radio, Kowalski is learning how to dance and sing to a salsa beat.

Kowalski: *Rubs head* I think I should put on a meer classical piece.

He reaches for the dial of the old radio and switches it to channel 93.7 F.M, a channel that plays only classical melodies. Pachelbel's Canon begins to play, and Kowalski gets up, dusts himself off, and dances again....
continue reading...
3
Many meer Miles To Walk: Epilogue
posted by peacebaby7
Five Years Later

“Are u nervous?” Laura asked as she adjusted Harold’s cap.

“Nah,” Harold answered with a smile. Laura crossed her arms and gave him a look. “Okay, fine!” Harold admitted. “Maybe a little.”

“You’ll do fine. Now, go! They’re waiting for you,” she zei ushering him toward the stage.

“And now,” zei a man at the podium, “our August Martin High School valedictorian of 2020, Harold Chance!”

Harold smiled and waved at the audience in the auditorium as they applauded.

“Thank you, everyone,” he zei into the microphone. The audience silenced...
continue reading...
5
Many meer Miles To Walk: (5) Acceptance
posted by peacebaby7
“Fifteen . . . sixteen . . . seventeen . . . eighteen . . . nineteen . . . twenty,” Kowalski counted as Skipper executed a series of pull-ups. Skipper dropped down into the wheelchair beneath him and worked the soreness from his muscles.

“Whew! Wow, I’ve been worrying about my legs so much, I’ve been neglecting my biceps,” he zei wiping sweat from his brow and reaching for a drink of water on a nearby table.

“Appears so, but twenty is good. Maybe you’ll do twenty-five tomorrow,” Kowalski zei with a smile. Skipper drank down the entire cup and set it down with a sigh.

“Maybe....
continue reading...
4
Many meer Miles To Walk: (3) What I Can't Do
posted by peacebaby7
Things remained quiet for the rest of that evening. Skipper had returned to his usual position in his bunk, although he had meer thought in his expression as opposed to the blank, indescribable one from before.

After a good night’s sleep, Kowalski awoke to a shuffling sound from below about an uur before the alarm. When he rubbed his eyes and looked over the side of his bunk, his mind snapped into full awareness at what he saw.

Skipper had managed to grab his wheelchair from volgende to his bunk and sit it parallel to it. After locking the wheel closest to him, he reached across the wheelchair...
continue reading... 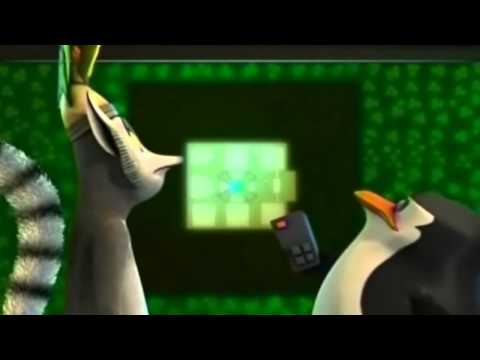 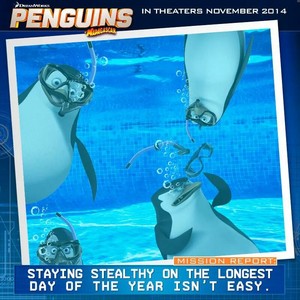 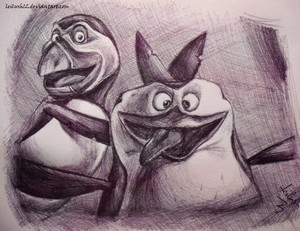 “The dolfijn Who Hired Me”

“The Penguins of Madagascar”

Previous: “It Happened One Afternoon” Next: “Crazy Old Cat Lady”

*Note: This episode is set in the time between “The Hoboken Surprise”, “The Return of the Revenge of Dr. Blowhole”, and ends after the events of “The pinguïn Who Loved Me”

Scene I: The Platypus Habitat

(Camera zooms in on Parker in his habitat, leaning on one elbow, half in the water, and half out) 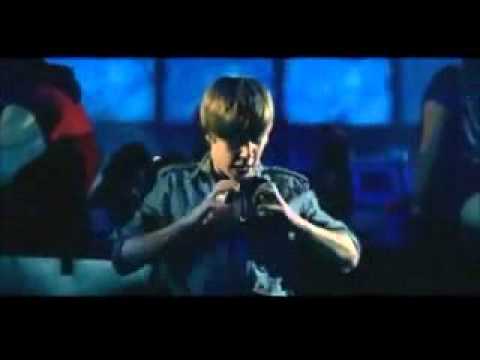 4
Afro Circus Baby
added by peacebaby7
I don't care if u hate Justin Bieber's guts and wish for him to fall off of a cliff. u must watch this video. XD *see comments*
video
More Cards
1234567891011