12
The Powers that be (Peter's Powers...)
posted by Miss_Dreamer

Peter jumping off a building
A look at Peter Petrelli's Powers:

FIRST MANIFESTATION:
Peter first becomes aware of his ability in his dreams, which tell him he can fly. (Posibly caused door the amount of time he spends with his brother 'The flying man') Peter uses an ability fist when he jumps off the roof to prove to nathan that he can fly. He really starts to understand his gift when he realises he also absorbed Issac Mendez's powers of precognition.

THE POWERS:
Peter's DNA re-sequenses itself to mimic the ability of other heroes around him. Mohinder describes Peter as a kind of powers sponge. Peter doesn't just mimic the...
continue reading...
5
Hero / Anti-Hero (Peter vs Sylar)
posted by Miss_Dreamer
Peter
-Aquires powers naturally,absorbing them like as ponge,Without harming the other hero.

-Wants to make the wrld a better place and to be part of something biggern than himself.

-His mother thinks he is weak and incompetent,
and wants him to be ambitious, like the rest of
the family.

-Has no interest in power over anyone,although now he is the most powerful person on earth.

-Will die to save a stranger, of anyone in the world; has never killed anyone.

-Wants to be special and powerful,because he believes he and his family are insignificant.

-His mother thinks he is to "Special" to be just a watchmaker wants him to have a inportant and lucrative job.

-Becomes obsessed with power so he can control his life and everyone around him.

-Will kill anyone who has a power, and anyone who gets in his way, including his own mother.

Peter Petrelli
Memorable quotes between Peter and the other charactors in season 1 and 2.

"It's my turn to be somebody now, Nathan!"


"Charles Darwin bred pigeons when he was working out his theory of evolution—married up various permutations to get maximum potential."

"What do u mean door that, 'maximum potential'?"

"I think he meant you, friend."

- Sylar, Peter (How to Stop an Exploding Man)

Quotes from Milo Ventimiglia (from the Heroes Officail Magazine)

-"I wasn't Necessarily looking for something as a TV regular, but the oppotunity presented itself and HEROES was a chance to work on Great Material"

-"When the HEROES scripts come in,they're always way better than i had expected."

-"When your a kid,everybody runs around witha red cape-we all wanted to be SUPERMAN of BATMAN,"

-"Hopefully we're doing our job well enough that people talk about HEROES at the workplace of at home pagina of with friends."

Hospicenurse peter is searching for direction in life when he starts to discover his ability to assume other heroes' powers. Charged door futre Hiro to 'save the cheerleader, save the world,' Peter rescues Claire Bennet from sylar.

He recieves training in his new powers from former company worker, Claude Rains. During the climatic battle with Sylar, Peter's powers threaten to spiral out of control and Nathan flyes hi into soace to prevent him from blowing up New York, and he explodes while in the air. Nathan is severly injured...
continue reading...
6
Some memroable quotes from Heroes; chapter 16 'Unexpected'.........
posted by Miss_Dreamer 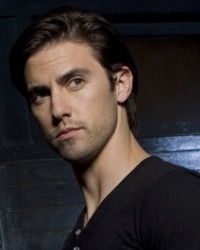 Peter Petrelli: [looking at painting of Simone and Isaac together] This is why u sent them after me, jealousy? With me out of the way you'd have Simone all to yourself.
Isaac Mendez: [shouts] u stal her away from me!
[pause]
Isaac Mendez: But I did it to save New York, to stop the bomb.
[he grabs a gun and aims his gun at Peter]
Isaac Mendez: I can do it right now.
[points the gun at Peter]
Isaac Mendez: With just one bullet and I can be a hero.
Peter Petrelli: [turning invisible] You're not a hero, Isaac. You're a junkie. You...
continue reading...
5
MILO'S NOT FLYING HIGH!
posted by Miss_Dreamer
Flying solo may be one of Peter's superpowers. But Milo Ventimiglia's dream of being a fighter pilot was ruined when he discovered it made him nauseous.The heroes ster was desperate to fly the high speed vehicles, but soon found out that having a weak stomach could prevent him from ever being a pilot.

During the writers strike, when Hollywood was shut down, I went up in a fighter plane. And...
continue reading...
2
Love At First Bite
posted by kim4312
Chapter Two:Love of Bite
Mikaela Sees Peter Depressed Over Nathan's Death
She Begins To Cry Because It Reminds Her of Her
Own Death In a Car Accident With Her Family
Peter Hears Her Crying, Mikaela Was Sitting In The
Bathroom Overpowered door Her Depression Over All
The Things Arthur Has Done To Her, Mikaela Grabs
Her Pocklet Knite Out Of Her Back Pocklet Trying
To Kill Herself But Her Cuted Hand Healed She
Screams In Anger & Cries, Peter Ran To The
Bathroom & Saw The Floor Bloody & Sees Mikaela
Laying On The Floor Crying, *Mikaela?* He zei In
Confusion, She Jumps & Hugs Him,...
continue reading...
2
Love At First Bite
posted by kim4312
Chapter One:Mikaela
One Night At The Petrelli Mansion, Angela Was Asleep Unitl She Hears Someone Screaming, She Went
Outside & Saw a Body Of Danko, She Looks Up & Sees
a Tall Pale Young Girl 18-years-old Covered In Red
Blood, Angela Remembers While Working With Arthur,
She Met The Girl Who Has Vampirism & Cannot
Control It, Angela Stares At The Girl & Feels So
Sorry For What Happend To Her *Mikaela* She Says
Mikaela Changes Into a Bat & Flies Away From Her
The volgende Day, Peter Was Walking & Hears Cries From
a Girl, He Peaks Through The Bushes & Sees Her
She Was Sitting...
continue reading...
7
Some facts u may not know about Milo...
posted by Miss_Dreamer


-Milo and Adrian auditioned for roles in the proposed_ Gilmore Girls _spin off where Milo was to be the son of Pasdar's Charactor. As ther is only 12 years difference between them, the casting director zei they would be better of playing brothers. Eight years later, they were playing brother's Peter(Milo) and Nathan(Adrian) on _Heroes_!

-He has been a Vegetarian since birth!!

-When he was seven his two sister's dressed him up as Madonna!!

-He didn't have to audition for the role in Bedford Diaries. The WB had Milo, and Milo only in mind for the role!

-The part of Chris Pierce on 'American Dreams' was written especially for him after he had met with the show's creators.

-His favoriete book is The Long Walk, door Richard Bachman.

-He has a great interest in directing

-He has a 67 Chevelle Super Sport named "Evelyn"

-His favoriete bands are The Strokes, Deftones, A tribe called Quest and The Hives

Always There for u
8
Peter's Memerable conversations
posted by Miss_Dreamer

Peter
Peter: [to Nathan] Hey, u know what? I'm just gonna fly off the terrace yeah? No? Hey, I can fly. Nathan so can you. Tell u what. Why don't u just race around the Statue of Liberty real quick. Huh? Give this tweedy cat something to write about.
• Episode: Nothing to Hide

Caitlin: I'm going with you.
Peter: No. I'm not risking your life too.
Caitlin: We were both in that Montreal painting. I think I'm supposed to go with you, Peter . Besides, when u find Ricky's killer, I want to be there.
Peter: What for?
Caitlin: To kill the bitch
• Episode: The Line

Peter: The world is in danger. What...
continue reading...
8
Peter's abilities s far...
posted by Miss_Dreamer

Peter Petrelli with his brother Nathan
Peter's abilities so far.....

Answer the following 13 questions, tally your answers(under queations) and then find out which Hero u are.......

1. One Morning u wake up with super powers. How do u react??
a)Jump for joy and pnone all u vrienden and family
b)Burry your head in the sand and carry on as normal
c)Switch immediatly into hero mode and test out your newfound powers
d)Panic of cry (probally both)
e)Devise a plan to make all your wildest dreams come true

2. What would be your ideal super power?
a)Telapathy
b)Being able to fly
c)HAving super strenght of super speed
d)Being able to see into the future
e)Being able to time...
continue reading...
5
Milo Rallies the Troops
posted by Miss_Dreamer

Milo is set to meet the US armed forces:

Milo Ventimiglia is to kom bij a party consisting of top, boven politicians and key figures in the world of american football on a series of overseas goodwill visits to US troops stationed overseas.
The group will wisit with troops, distribute giveaways, pose for photographs and sign autographs in three countries as part of the unites service Organisation's tour.

"This opportunities gives me the chance to meet real heroes of the country," Ventimiglia toldPegasus News "I am looking vooruit, voorwaarts to spending time with men and women of the US armed forces"

This information came from the Heroes Officail Magazine, issue six.