1
Dani Describes Her Best vrienden (from My Book)
posted by 16falloutboy
Patrick(Tricky) Vaughn Stump: A quiet but friendly face and a voice to DIE for. My husband and frontman of Fall Out Boy, my hopes and dreams, my life and heart. He is very talented and he is about the most sweetest thing I've ever met. He was my best friend ever since 3rd grade then we became a couple in high school, I moved away and never saw him again...but I'll save that tale for another time as for I reunited with Patrick after a tragic event between one of my exes. I love him with my all my hart-, hart and he's really special to me...and now we're marrried <3

Danielle(Dani...don't ever...EVER call me Danielle....you'll be sorry >:)Jessica Stump: A very attractive tomboy....wow hear me explaining my sexiness XD Anyways, I always was a tomboy but it doesn't seem like it now since I look so gorgeous and wear a lot of sexy stuff but trust me...I am a tomboy, I love wearing boys shirts(especially my husband's >:3), I am the lead singer of a DEATH/HEAVY/POWER METAL band named Party Poison. I know how to play Metal on a violin(mine is a black one <3) but enough talk of that.....I am a very kind person...until someone pisses me off(you don't want to mess with me, I once asked my buddy Gerard Way to charge into me, he almost did until I grabbed him, picked him up and threw him, don't worry he wasn't hurt and I gots good skill cause if u throw a stempel, punch at me of a knife, I can catch whatever it is before it touches me even without knowing someone threw something at me) So yeah, I am pretty fucked up XD Enough about me....

Peter Lewis Kingston Wentz(Pete! :D): A perverted, calm guy and bassist of Fall Out Boy who happens to be my brother(I have two brothers)....I know poor me DX just joking....he is Patrick's best friend and he can be sweet...when he wants to be. He loves  making jokes(especially on Gerard Way XD) and he loves..I mean LOVES my homemade Oreo pie(I mean who doesn't?)

Victoria(Tori) Justice: A sweet and kind girl whom I met during my solo career. She is sadly my brother's wife XD, and she's a talented singer and actor. She's really sweet, and I love her to death. She's one of my best vrienden :D

Gerard(Gee) Arthur Way: The awesome vampire of the night! :D Seriously he's a vampire but he's unlike any vampire I know! He doesn't get affected door light of Sun of garlic but he does hate the Sun and always wears sunglasses(very dark ones) and sometimes carries a black umbrella. He's another sweet friend of mine, he is like my third brother :P Anytime someone messes with me he WILL get u so watch what u say and do around me(when I'm with Gerard of door myself) He actually sleeps in a coffin(it's really comfortable) but he does sleep in a normal bed with his wife Lyn-Z most of the time. Lastly he's the awesome lead singer of My Chemical Romance ^_^

Lyn-Z Ann Way: A chick with an awesome style and the bassist of Mindless Self Indulgence. She is also a tomboy but not as much as me :P She's really fun to hang with ya know? She is so serious a lot of times though and she usually stops Gerard from getting into fights(when she's with him) yeah she's protective of Gerard(she doesn't want him to get into trouble) awwww ^.^

Billie Joe Armstrong: Oh God, we've come to the worst guy DX (just kiddin ya) Billie....oh how do I begin to describe the lead singer of Green Day.....oh dear...well he likes to blame people(especially me!) for no fuckin reason at all, I blame him for fun and to get him back >:) But I gotta say Billie can be a kind guy...and fucking hilarious at times. He is a very random guy(always!) and so is his wife.....

Lindsey Rose Armstrong/Jessup: A very very very super epic chick who is fucking random and fucking awesome!(I zei that already XD) She's Billie's wife and probably the most randomest person on Earth! She's another best friend of mine and she always knows how to make me smile of laugh.....Lindsey's awesome! So frickin awesome!

Michael(Mikey) James Way: How do I start describing Mikey? I don't really know him THAT well....he is the bassist of My Chemical Romance though....can't forget about that oh and he's Gerard's brother. Mikey isn't a vampire like Gerard but he can be tough at times kinda like Gerard....but I got to say, he is a really nice guy :)

Chester Charles Bennington: A very sensitive guy and the lead singer for Linkin Park. :P Chester really gets upset when someone calls him a nerd D: I always yell at whoever does(these two chicks which really pissed me off) like I said, watch what u say around me and my vrienden >;)
deathding likes this
2
Bucket lijst
posted by kitty190123
1. Meet someone with MPD
2. Become scientist
3. Warn Abraham lincoln not to go to the theater
4. Wear a overhemd, shirt that says "Life" and hand out lemons
5. Go to Australia
6. Win a guinness World Record
7. Walk in the Olympic Opening ceremony
8. Work at Disney in the summer
9. Meet Roshon Fegan
10. Win the lottery
11. Eat a weird food
12. Go on a cruise
13. Make a viral video
14. Voice an animated character
15. Find a cure for cancer
16. Swim with Winter the Dolphin


The following is stuff I'm writing just because my artikel isn't long enough.
12ye2917ofvuhydr08dfcj34e8idhfjhf8ruehfouiqr3ujfipqo3eurfdji4kejchnefimyherjdsnikfvrrjfhgeruhgfoerhwojfpowhf4u759ygf
4
Blonde Joke
posted by flabaloobalah
So my uncle told me this joke and I HAD to post it:

So two blondes walk into a bar and sit at the counter. They order drinks, high five, and yell "Three months!" They finish their drinks and repeat.
The bartender is curious and asks, "What does 'three months' mean?"
One blonde explains. "You see, we bought a puzzle and it zei on the front '3-6 years', but we finished it in three months!"

Got to be the dumbest blondes on earth!

Go confidently in the direction of your dreams. Live the life u have imagined.
Henry David Thoreau

Every great dream begins with a dreamer. Always remember, u have within u the strength, the patience, and the passion to reach for the stars to change the world.
Harriet Tubman

Reach high, for stars lie hidden in your soul. Dream deep, for every dream precedes the goal.
Pamela Vaull Starr

All men dream but not equally. Those who dream door night in the dusty recesses of their minds wake in the dag to...
continue reading...
2
A Review for INVADER ZIM door Johnen Vasquez
posted by thetacoman
Some people may ask, "Why Invader Zim first?" I say SCREW IT, ILL DO WHAT I WANT! In any case, the toon is one of my favorites. It represents a better time for Nick. Better shows, better actors, better Nick. Altough this is a time since past, Nicktoons has made the GENIUS(sp?) decision to bring it back.
If u look at the definition of Invader Zim on Wikipedia(again, sp?), it says that IZ employs a comedy style called "black comedy". Basically, this means that IZ uses dark methods of humor, such as the gluttonus "Bloaty the pizza Hog", of perhaps just the dark scenery in IZ (it gives a very...
continue reading...
2
Its Hard [original song]
posted by cute20k
Never let go----
I know that its hard
Your life wasn't easy
Well neither is ours

Honey, life is hard,
Did u really think u were alone?
You crossed the fine line, the one that pulls life and death apart
You were never on your own

You were always sayin', just hold on
You just let go, of everything u ever had
You just ended it, on your own
And u had everything, but u let it come to an end
Ended with a 'I can't take this'
(What, exactly?)

Honey, life is hard,
Did u really think u were alone?
You crossed the fine line, the one that pulls life and death apart
You were never on your own

So i got up this morning, rolled out of bed, and had a shower. When I got out of the douche (1 uur later) i yelled at my mom three times, asking her if i could have pikelets for breakfast. She didn't hear me. Then i got ready for for school and walked to the car. I stared at the car door. I asked my mom if the door was locked. I tried to open the door. It opened. I smiled and got in. I looked at myself in the side mirror and wondered why i looked so weird-maybe i needed to brush my hair???. I turned on the radio. i shivered. i turned on the heater. my mom drove me to school....
continue reading... 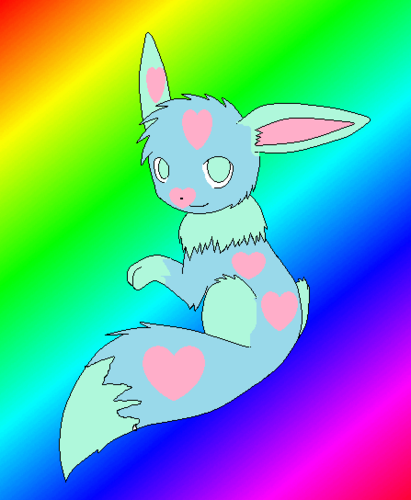 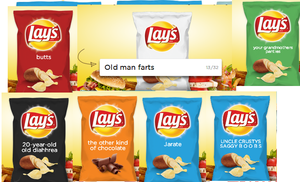 I'm really not taking this contest seriously
added by Violet_Shade

2
Now u Know!
added by tanyya 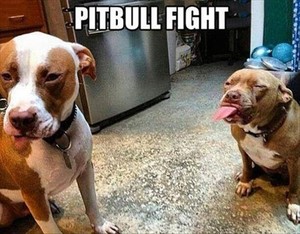 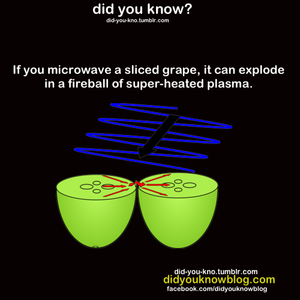 3
Did u Know?
added by tanyya 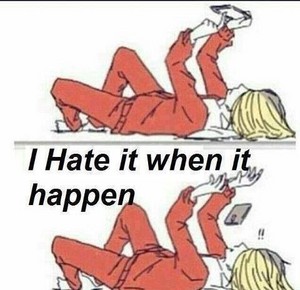 2
Does this happen to you? It does to me
added by Heidihi2 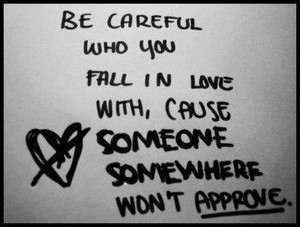 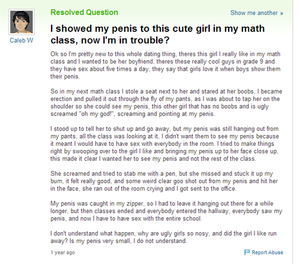