Name: Melissa Adams
Age: 13
Role in Kingdom: *Shrugs* I dunno what consists in your Kingdom. You pick!
Relationships: Fang, Devin, Lexi...
Hero, Villain, Anti-hero or Civilian: Heeeeerrooooo
Appearance: Slender build, raven black hair(Catch the refrence? Hmm Hmm?), green emrald eyes.
Short Background: grew up an Experiment for the school, escaped, was homeless for a while, parents found her, became a hero.
Weapons if they use them: Swords.

Short Background: parents died when she was 7, moved to gotham w/ her brother, brother went missing, joined the team, currently trying to find him and train to become a hero.

Weapons if they use them: any knife she's an expert with. Can handle fire-arms pretty well, but hates them.

een jaar geleden Gunfire said…
Name: Xerran shepard (he does prefer nobody uses his last name and oly a few pepol knowe it, beceas his brother conviced him it is beter to hid the name to protect the famly)
Age: 17
Role in Kingdom: captain of the (royal) guard.
Relationships (Family or Romantic): Gunfire is his twin brother
Hero, Villain, Anti-hero or Civilian: Hero
Appearance: A bt slende, blod hair bleuw eyes, half lion (see pick)
Short Background: xerran and his faly wher walking in the forest when he lost them he found a group of lions and got raced by them sinds thad ages, only years later he found his brother agien.
Weapons if they use them: His owne claws, fang like theets, and a knive made frome bone.

een jaar geleden AislingYJ said…
SOUNDS LEGIT!!!
Name: Aisling Carter
Age: 15
Role in Kingdom: I dunno what the options are, so..you decide! Make it epic for me, will ya?
Relationships (Family or Romantic): None (although she sorta "has a thing" with Rowan but they're not exactly official yet so.....)
Hero, Villain, Anti-hero or Civilian: Hero!
Appearance: solid build, 5'9", shoulder length wavy dark brown hair (ponytail or bun, whichever is more medieval!!! xD), blue-green eyes, freckles
Short Background: Orphaned and living on the streets till age 8, Axxis found her, age 10 he tried to give her powers, didn't work, tried to kill her, she ran away, found the team, he hacked her mind, etc. etc.
Weapons if they use them: mostly martial arts but sometimes knives
((OOh can she still have her gauging power in this? Since it can just be a skill??? Pweeeease?????))
Oh and I found a medieval style character maker game, so here's medieval Ashy!
(btws she hates wearing dresses so this'll be interesting!!!!! xD) 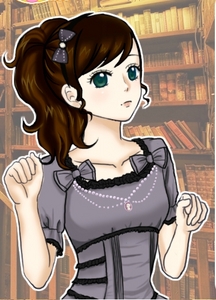 een jaar geleden BentleyYJ said…
Name: Bentley Thompson
Age: 16
Role in kingdom: head swordsman or anything to do with swords
Relationships: Boyfriend to Aryess
Hero or Villain: part of a hero in a way but sorta if a civilian
Appearance: he has black hair that often is in his face, grey eyes, he is well built but sorta slim
Short backround: when he was 6 his mom ran away from his dad and his dad beats him up and he's still looking for his mom but is beaten up a lot
Weapons: he has a sword handle that pops out but only he can use it

(( look at his pics on profile sorry can't upload pic ))

Ok! Kingdom of Keadilan is about medieval YJ. Simple as that! If you want your OC in it just give me a small bio.

(They NEED to have a first and last name)

Role in Kingdom: Assassin (Idk I think they had assassins? If not... then a hitgirl/hitman)
Relationships (Family or Romantic): Terror (boyfriend) Dante (brother)

Appearance: Short blonde hair, red eyes, she is 5'10 and is somewhat muscular.

Weapons if they use them: Daggers and a crossbow?

een jaar geleden MeridianYJ said…
Name: Meridian RoCarren
Age: 16
Role in Kingdom: ((can she a princess? or some kind of royalty?))
Relationships (Family or Romantic): None
Hero, Villain, Anti-hero or Civilian: Hero
Appearance: White hair, medium height, pale skin, silver eyes
Short Background: Was once royalty, until she was over thrown by another girl with white hair, which is the mark of royalty in her country, has been searching for the stone that can make her a queen forever
Weapons if they use them: Swords, mace 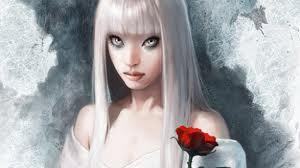 Name: Pandora Rouge
Age: 15
Role in Kingdom: (since her family os remalted to distant royalty) Dutchess of Paris (Friend to anyone who is anyone) Secret Assasin
Relationships (Family or Romantic): Married to Dylan Spade, has a 6 month old son Jason
Hero, Villain, Anti-hero or Civilian: Hero
Appearance: Short Brown Hair (when she is being a dutchess), Dark eyes make up, deep and pure green eyes, short-ish, sexy and slim figure, gothic appearance
Short Background: She was taken as a child and all 126 members of her family were mysteriously murderd, she returned to the world 11 years later, no one knows what happened to her but she is famous for her familys past, fortune and diamond company.
Weapons if they use them: Extremely Powerful Magic (which she can do almost anything with), Black Wings, Adamantium Skin and Finger Nail Claws (30cm), Good Gymnast, street fighter and kung fu artist, She is trained to use guns and swords to a very high rate and also most fighting styles, carrys a Vorpal Blade (that can kill anyone or thing), Hobby Horse, teapot cannon, pepper grinder Butterfly Dodge (her body turns into blue and black butterflys for a moment to move out of the way of something), Extreme senes, super strenght (in adamantium mode), smoke travling (body turns into jet of black smoke) 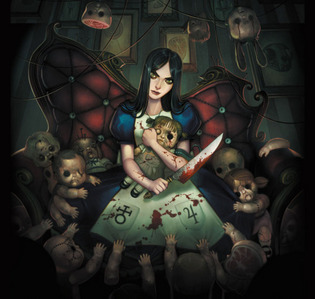