1
Before the Law - Chapter One "City Limits"
posted by LinkKinuzuma13
As the sun set just below the cityscape, four unusually suspicious characters roamed the darkening streets. Bearing their duel disks and decks, these people remained quiet in each others presence. A shadow was splayed across all of their surroundings, making it nearly impossible to spot them from any window not on the ground floor.

"We're nearly there," one of them spoke up. As she said, within only a few moments they were climbing through an open basement window. As they entered, they were greeted door cheers and smiles, and perhaps the occasional sneer of scoff.

"Welcome," the manager smiled. "It's good to have u here."

"It's good t be here," the head of the group of four spoke smoothly.

"Hey!" a lone voice shouted over the noise of the place. "Ne, Ezra! Duel with me first?" he pleaded. "I've always wanted to test my mettle against the leader of The Enforcers!"

The one in vraag removed her kap and gave the boy, not much younger than her, a smile. "Sure," she responded simply.

The other three members of The Enforcers cheered as she made her way to the opposite end of the duel ring. She pulled out her deck and inserted it into the duel disk, automatically turning the device into standby. The boy did the same, even going so far as to copy her stance, lax and calm, even though he was the complete opposite.

The manager walked into the middle of the ring, smiling and holding onto his microphone. "Ladies and Gents! We have a very special opening duel tonight!" he announced. "This young man," he gestured to the challenger, "has wanted for so very long to challenge the Bane of Duelists, and he's finally getting his chance! Mister William Lio versus the infamous Ezra Leonhardt!"

William bowed at the mention of his name, whilst Ezra simply nodded. Many unsettled whispers rose from Williams companions. They obviously feared for his safety, and with good reason.

Ezra herself was not intimidating. She was small for her age, perhaps five-foot six. Her eyes were a deep green and her hair was long, well past her lower back. The silky brown hair was always left half up and half down, creating a large ponytail near the center of her head while the rest hung loosely. Her brown vest and navy sleeveless tee showed off her bare arms, toned and athletic. Complete with black jeans tucked into mid-calf boots, she didn't seem intimidating at all.

But it was the fact that Ezra was nearly unbeatable, at least door the standards of the slumfolk. It was understandable that the boy's vrienden didn't want his pride to be hurt.

Ezra held up her disk as the manager retreated to his post behind the counter. A holographic countdown was projected into the middle of the ring, counting backwards from ten. William drew five cards and Ezra did the same. As the countdown hit one and then disappeared, the two of them locked eyes.

"Duel!" they shouted in unison.

It began with Ezra making the first move.

As she lay her hand upon her deck, she uttered "Draw," and took a single glance at her hand, a strategy immediately forming in her mind. "First, I summon Scrap Shark!"

Ezra lay the card onto the disk, it's image projected for all to see. It's razor sharp teeth glinted in the dim light of the duel bar.

"From my hand, I special summon Scrap Orthos and activate it's effect. In order for this card to stay in the field, another scrap monster must be destroyed. I destroy Scrap Shark."

"Now it's effect activates. Since it was destroyed door a "scrap" card, I can send one monster from my deck to the graveyard. To my graveyard I send Scrap Beast. I set two cards facedown and end my turn."

William wasted no time in acting. He drew his card.

"First, I activate Pot of Duality! It lets me look at the top, boven three cards of my deck and choose one to add to my hand." He paused to look at the selection he was given, eventually smiling and settling on Foolish Burial. "Next, I lay down the field spell Dragon Ravine!"

Ezra raised a single brow as the bars simple walls were replaced door sheer rock faces and dragons overhead. She turned her attention back to Will.

Ezra narrowed her eyes. He has a tuner on his field.

"Now I will tune my Phalanx with my Legionnaire!" William scooped up the two cards and sent them to the grave and pulled a card from his extra deck. "Synchro Summon! Dragunity Knight - Gae Bulg!"

"I activate my trap!" Ezra interrupted. "Bottomless Trap Hole. This card negates the summon of a monster with fifteen-hundred of meer attack points and removes it from play, which means your Dragunity Knight goes bye-bye."

William doggedly watched as his dragon was shattered and expelled from his field. His eyes shined with a new irritation as he glared at Ezra.

"I place one card facedown and end my turn," he scoffed.

Ezra silently took a deep breath and drew her volgende card. "I summon Scrap Chimera in attack mode! When this card is normal summoned, it allows me to special summon any "scrap" tuner monster from my graveyard. I summon Scrap Beast to the field!"

The beast, covered with odd car armor and armed with sharp fangs appeared volgende to its companion.

"Now, I tune the level four Scrap Beast with my level four Scrap Chimera!" Ezra quickly removed the two cards from the field as the Beast dissolved into four separate rings and guided the chimera. She held her hand over the extra deck and swiped the card that peeked out from within. "Synchro Summon! Scrap Dragon!"

The dragon, composed of assorted pieces of metal and junk, appeared on the field. It flapped it's sheet metal wings and let out a tremendous roar.

"Now I activate it's effect. Once per turn, Scrap Dragon can allow me to destroy two cards on the field, one on my side and one on yours. From my side, I will destroy my set card, Scrap Crash. From your side, I will destroy the set card." Both cards were flipped face up for a brief moment before emitting light and shattering. Ezra smiled when she saw that she had destroyed Williams Mirror Force, a card that could have destroyed Scrap Dragon if she had been reckless. "Now, Scrap Dragon, attack William directly! Scrap Wing Buster!"

The dragon let out a roar and raced towards it's target, spreading it's wings as it 'sliced' through it's adversary. William let out a frustrated cry as his life points were reduced door twenty eight-hundred. "I set one meer card and end my turn." Ezra said, gesturing for William to make a move.

He growled as he drew his volgende card. "First, I activate the effect of my Jar of Greed, which allows me to draw a card!" He did so without hesitation. He smiled. "Next I summon Dragunity Aklys! When this card is normal summoned it allows me to special summon one Dragon-type Dragunity monster from my hand and equip it with this card. From my hand I summon Dragunity Mystletainn and equip it with my Dragunity Aklys." The sword-wielding dragon appeared, it's blade gleaming bright in the dragon ravine that it called its home. The yellow dragon bared it's fangs at the Scrap dragon across from it. "Now I set one card face down and then equip Mystletainn with the spell card Mage Power, which gives my monster five-hundred attack points for every spell of trap card I control. I control two, so it's attack points are increased door one-thousand!" He gestured to his monster, now surrounded door an eerie aura. "Now, Mystletainn, Attack Scrap Dragon!"

"Not so fast," Ezra held up her hand. "I activate my trap card, Scrap Iron Scarecrow. This card negates your attack, and when this effect resolves it will flip back into set mode for me to use again later."

William huffed and glared at Ezra as his monster returned to his side. "I end my turn."

"Very well then, I draw!" Ezra shouted, signaling the start of her turn. "First I activate Scrapyard, which allows me to add one Scrap tuner to my hand, and I choose Scrap Worm. Next, I'll summon that Scrap Worm to my field in Attack mode!" Ezra set the card on her disk, the small metal worm appearing at her side, It's six sets of steel teeth spun wickedly. "Next I activate Scrap Dragons effect. I destroy Scrap Worm and Magic Power." As the two cards were destroyed, William smirked. "Now, Scrap Dragon, attack Mystletainn!"

"Not so fast! I activate my Trap, Windstorm of Etaqua!" William screeched. "This card changes the battle positions of all monsters my opponent controls, which means Scrap Dragon is changed to defense position!"

Ezra held up her hand. "I activate my counter, Dark Bribe! This card negates the effect of your trap card and lets u draw one card from your deck."

William silently drew the card he was given, shooting a nasty look at Ezra.

In another grand display of power, Scrap Dragon sliced through the monster effortlessly and lowered Williams life points door seven-hundred.

"Are u done yet?" William asked, blatantly attempting to annoy Ezra.

"Finally! I draw!" William shouted. "First, I activate my Spell Card, Monster Reborn! This card allows me to summon any monster from either graveyard to my side of the field. I summon my Dragunity Mystletainn!"

Ezra clicked her teeth as the dragon reappeared on the field once more.

"Is that it? Alright, I draw!" Ezra spoke. "I summon from my hand, Scrap Goblin."

A small creature comprised of broken pots and pans appeared at her side, letting a small burp escape its nonexistent lips.

"Next, I activate my Spell Card, Scrap Sheen! This card allows me to destroy one monster on my field and have all 'Scrap' monsters gain one-thousand attack points until the end of this turn. I destroy Scrap Goblin!"

"And now, because of the effect of Scrap Sheen, my Scrap Dragon has thirty eight-hundred attack points!" Ezra pointed at William. "I'm not in the mood to keep playing these petty games with you! You're a smug little boy with only feelings of self-preservation. I will end this! Scrap Dragon, attack William directly! Go, Scrap Wing Buster!"

Spreading it's wings, the massive dragon sped towards William and landed another direct hit, putting his life points at zero. The Dragon Ravine disappeared and William fell to one knee. "How...?"

"How? It's simple. The better duelist won." Ezra stated matter-of-factly. "If u had stopped to think for a moment instead of merely trying to overpower a single monster, u would have won."

William glared up at her. "You bi-"

Ezra leaned down to his eye level. "That's enough." She stood, turned and walked away, returning her cards to her deck and returning to her vrienden sides.
Daisy121519 likes this 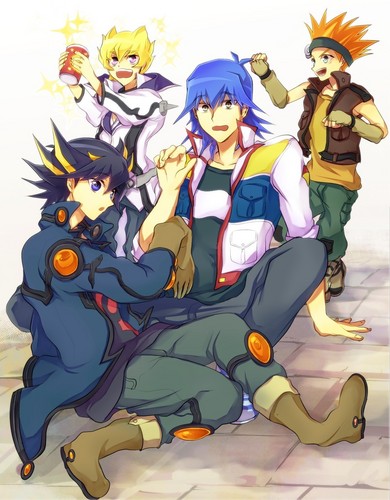 1
yugioh 5ds episode 81 english subbed part 2\3
added by beth96108
video
Before the Law - Introduction to the auteur and Characters
posted by LinkKinuzuma13
Explanation - I don't even know. This just popped into my head like a week geleden and now I'm writing a Fanfiction about it.

What if the Enforcers had a leader before Kalin Kessler? Before Yusei, Jack and kraai joined their ranks? What if? That's what I'll be expanding upon.

Decklist Feature:
One Decklist will be featured every chapter.

The first Chapter will be up later today, for those interested.