2
Total Drama Replay: (2) "Downfall"
posted by Mp4girl
I decided to throw in a couple of new people..

"Ranma? How long until we get there?" Yuri pestered her brother as he drove to Niagara Falls.
Ranma looked back. "How would I know?!" Ranma groaned, then winked at Sofie. "If she asks, though, I might consider telling her."
Sofie looked down and blushed. "How long until we get there?" she asked nervously.
From the steering wheel came Ranma's laugh. "Like, ten minutes?"

Yuri scowled. "You told her? RANMA. I was the one who zei u could come with us."
Penny and Christy nodded in unison. "Yeaahhhh, she did," they chorused.
Sofie said, "That was a good idea, Yuri."
Jess giggled. "Suuuuuure."
Yuri didn't say anything.

Suddenly, there was a scream coming from the back window. Courtney looked up, her eyes wild with excitement.
Gee, isn't THAT a great look for her! Yuri thought blankly.
"What is it?" Sofie questioned wearily.
"Yeah, tell us," Penny murmured.
"There are horses outside in the pasture!" she squealed.
Yuri, Christy, and Sofie exchanged glances.
"Horses?" Jess muttered. "You're serious?"
"Horses are cute..." Penny tried to back her friend, but she knew she wasn't getting anywhere.
Yuri wrinkled her nose. "Horses? Really?!"
"She's obsessed with horses," Sofie chanted.
Duncan looked up from his place beside Ranma.

"What's up with the stupid horses?" He asked, like WTF.
Yuri's hart-, hart fluttered. "Courtney's problem." She shrugged.
"I can tell," Duncan muttered angrily. He had developed a hate-feeling towards Courtney, for some dumb reasons unknown. Yuri loved that, 'cuz she loved Duncan and hated Courtney.
"Yeah," Sofie chimed in, shooting a look of smug-ness back at Courtney.
Courtney squinted. "Okay, I seriously don't get you."
"No," Jess an Christy giggled. "We don't get you."
"Ain't that the same thing?" Courtney groaned.
Gwen walked up to the front of the large van. "Like, don't u have somewhere u need to be?" she asked Bridgette.
Bridgette looked back at her with confusion on her face. "What do you..."
She was interrupted door a giggle from Yuri and Sofie. Penny covered her mouth with the fingers of one hand.

She blinked in confusion. "No, really. What are u guys talking about?"
Christy rolled her eyes and pointed at Geoff.
Gwen nodded, along with Jess.
Bridgette laughed. "Seriously. u guys are SO lame." She started inching towards Geoff.
"Brige, wait--" Gwen called, but she felt a hand on her shoulder.
"Let her go," Sofie zei quietly, as if they were starring in a soap opera.
They fell down laughing (like idiots, I'd say.)

"Okay, okay," Gwen said. "So then Courtney was like fifteen, and once she forgot to wear pants of something, and I bet it was embarrasing," she laughed, holding her hands up in the listen up and I'll tell you position.

"You're serious?!" Yuri said. "How do u know this?"
"Oh, u know," Gwen said. "Diaries."
Sofie gasped. "Courtney has a diary?!"
"What do we have here?" Jess sniggered.
Gwen looked at Ranma cautiously, as he neared a waterfall.
"I have a feeling we're going over," Yuri muttered.

Oh, look at what happened. Ranma hit a rock, and the whole busje, van slid off the waterfall.

--
Broccoligirl and Lolly4me2 like this
Lolly4me2 XDDD The ending sentence cracked me up.
CourtneyGirl AWSOME SO COOL
Mp4girl Okay, okay. The ending sentence was something I did out of [i]panic.[/i] Like, my parents were coming home from the stupid opera they went to last night, and I [i]had[/i] to finish this before they caught me. TT.TT
Lolly4me2 Ooooh. BUT IT WAS SO FUNNY. XDD
Mp4girl Yeah. I'll give myself that. XP I wrote the first paragraph for you, Sofie. *HEART!!*
Sam and Duncan - Young Love.
posted by sumosabs
*After sadie was voted off*

IN THE MESS HALL AT BREAKFAST:

Sam is sitting door herself.
Duncan comes over to annoy her

Sam: Get lost Duncan
Duncan: Its a free country, I can sit where ever I want!
*Sam stands up*
Sam: I DONT GIVE A DAMN!!!!
*Everyone stares*
*Sam sits down*
Sam: Just please go away.
Duncan: Since when do u say "please"?
Sam: Shut up before I beat the crap out of you
Duncan: OOOO! Im so scared
*Sam Stands Up and pours her pap on Duncans head*
Duncan: *shocked* What THE HELL WAS THAT FOR!!!
Sam: For being you
*Sam Smirks*

*Chris walks in*
Chris: Did any of u actually eat the crap, I mean...
continue reading...
2
The Power In Us: The Musical New York part 1/3
posted by 7thGradeGenius

Rachel
I woke up the nest morning and screamed. I had to do a broadway musical...with Douglas...I gagged. I wanted to stay home pagina and keep myself locked i nmy room until I rotted. Anything was better than being with him.

Then, my roze rhinestone-studded cell phone started ringing to Miley Cyrus's Party In The U.S.A. I turned over and picked it up. Caitlyn Thompsett. God...no. I picked my cell up anyway and answered it. "What?"

"Hey, get up and go!" Cait said. "You'll be late!" Then there was a knock at the door, and I ran outside, hanging up my phone, go get into Cait's mom's car to go to New York.

Born.
Learning to walk talk, and read.
Grade school.
High school.
Spelling bee.
Class president.
Total Drama...
continue reading...
2
Dawn's minor problem
posted by xxXsk8trXxx
Dawn: So can u remind me why i'm here?
Doctor: Your therapists and other doctors give u too many pills
Dawn: So I have to stay here for seventeen days like Amy Winehouse?
Doctor: It's different for everybody
Dawn: Whatever. *goes in to group room and sits in chair* Izzy?
Izzy: Too...many...RAHHR!!!!!!!!!!!!!
Dawn: I missed u too... HOLY SHIT IS THAT MILEY CYRUS????
Miley: Sssshhh! I don't want any press to know about me!
Group leader: Hello, my name is Sammuel Jackson, but call me Sam. I'm here to lead the group!
Random dude: You're gay.
Sam: Jonothan, we are not allowed to say things like this...
continue reading...
6
u Belong With Me
posted by Lolly4me2
I looked out my dorm window into Duncan's. Splitting up in TDI made me think I would never see him again, but here he is, the building right volgende to mine at the same collage. As Duncan walked out of the room, Leshawna suddenly walked in. "What up, girl?" She asked and set her bags down. I turned around and tackled her. "SHAWNI!" I screamed. "Hey, Sofie." She laughed. "It's been a while." I didn't stop hugging her. "Uh, honey? Shawni can't breath." I let go and stood back sheepishly. "Ha, sorry." "No problem, girl. So, I can pick my bed?" "Yeah." "Sweet." Leshawna jumped onto the top, boven bunk and...
continue reading...
1
Seasons Super Group - The story of four superheros that went on TDI
posted by xxXsk8trXxx
Dr. Harris Ligawitz, a successful scientist, lived on his own in a big mansion in the forest. He wondered if there was a human who contained special abilities. To figure this out, he studied comic boeken and compaired them to real science. He took a trip to London to study more, when he saw a baby girl lying down in a dark alley, alone. He picked her up. She was the most beautiful thing he's ever seen. She had beautiful, nutmeg colored hair, and piercing green eyes. She reminded him of the autumn, and he named her Autumn.
He did a few tests on her, and figured out a way to give humans special...
continue reading...
17
TDI Bachelorette Christmas Special!
posted by Bridgette101 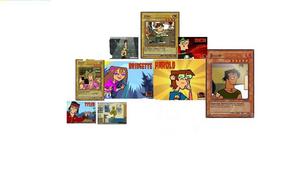 People who are gone
Misty:Great dag for a challenge

Misty:Wishing me up a gift it has to be good to of u will be in the bottom two

(Everyone wishes and Misty hears)

Geoff:I wish Misty would be me party Princess

Cody:I wish Misty would be mine

D.J.:I wish Misty had a Bunny

Justin:I wish Misty would kiss me

Tyler:I wish Misty had a football

Trent:I wish Misty had a love song made bye me

Misty:Time to go to the bond fire

(Everyone goes to the bond fire)

Misty:The bottom two is Duncan and Harold and whos veilig is...Duncan your veilig but sorry Harold u wern't my type at all

Everyone
2
total drama island's justin(episode 3 the movie)
posted by codythemaster
justin:the last name I'm about to call is heather

justin:lier!!! go home pagina and walk the dock of shame!! u were never my type

justin:ok then that's all taken care off I guess it's time for the volgende challange this challange is a boyfriend girlfriend favoriete it's called a movie

(justin watched alot of movie's with the girl's but one movie was not justin's favorite!)

justin:ok then girl's Its time for the name call out first is bridgette,leshawna,izzy,katie,courteney,gwen,lindsay, ok then it's sadie of heather and heather I'm kinda despised at u since this is the seconde time u went to the bottam two heather
the last name I'm going to call is...................... 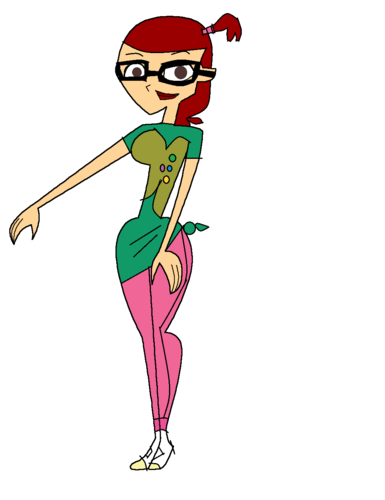 Zoey as Beth
added by DandC4evacute
Source: me! 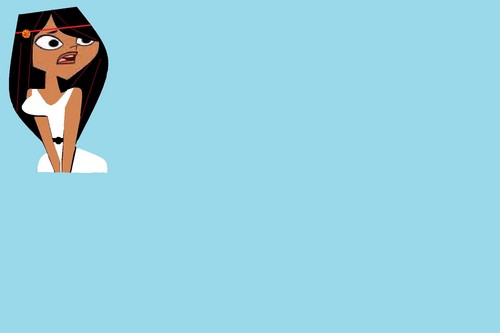 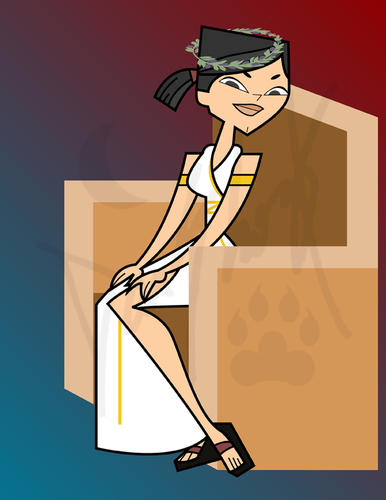 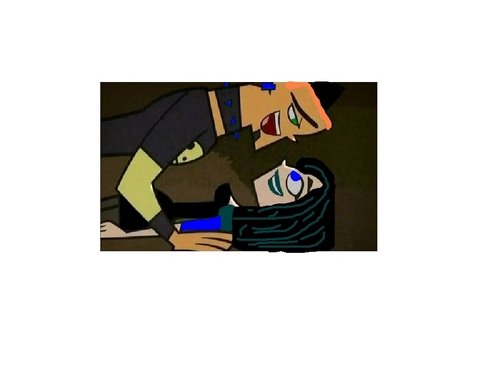 I love being mean
added by frosti529
Source: Teletoon
Total Drama Theme Songs!
posted by nocofangirl218
Here is what I think the TD charecters listen 2! I'll even tell u why I think it's that persons theme song! Hope u all enjoy!

2) Cody - Almost door Bowling for Soup
Reason: I can totally see him sinning this to Gwen.

5) Gwen - Cruch, crush, crush door paramore
Reason: Reminded me of her when I listned 2 it. 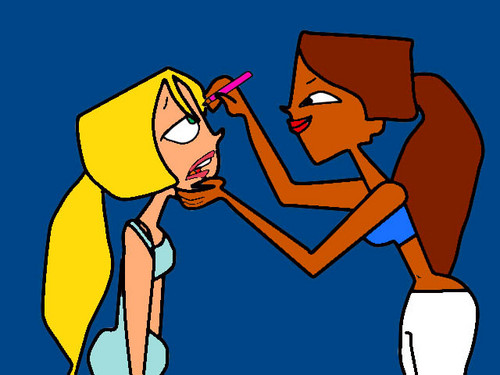 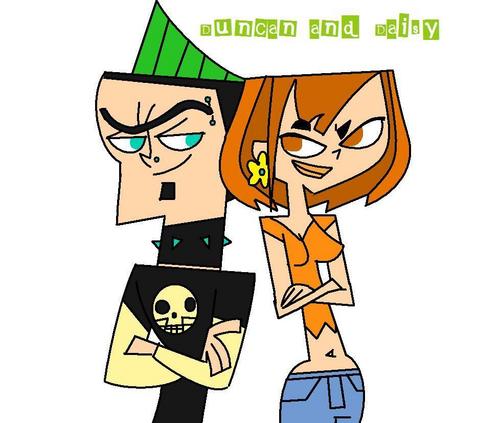 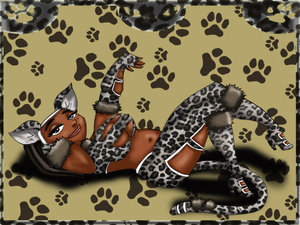 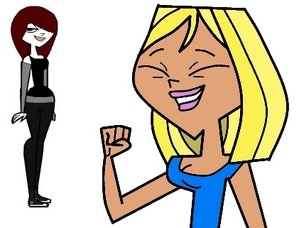 (Left) DanixxDumb-Jasper (Right) soxfan89-Lani
hallo guys! We're coming at u live from Camp Fit, somewhere around New York, New York; I'm u one and only host, Jasper—
(Gets cut off from voice off scene) and what about me?! Jasper: Fine. And co-host Lani. (Lani is shown) Lani: Hi, I’m-- (gets cut off from voice off from Jasper as she’s pushing Lani out of the way)
Jasper: No one cares! Any way I’m dropping the newest reality shows on television, now! (Moves to Dock of Shame) And just like the original season Total Drama Island, were on an island! Ok, so here's the deal, thirteen campers have signed up to spend- uh, a couple weeks...
continue reading... 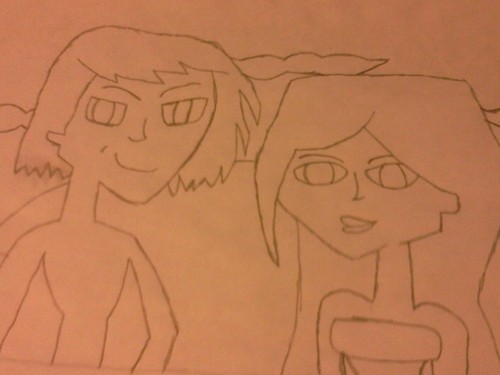