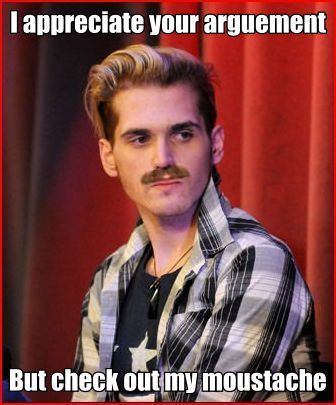 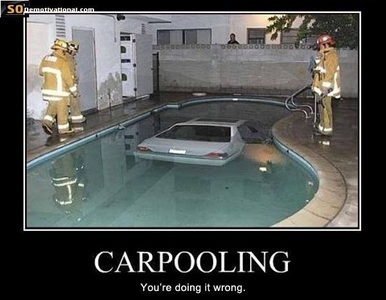 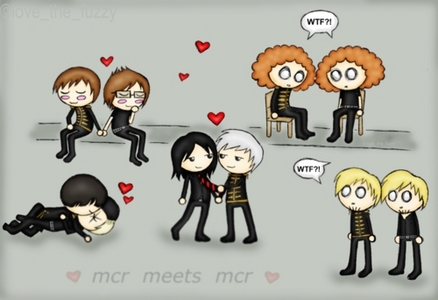 YOU'RE HERE WITH ME, DR. DEATH DEFYING

I'LL BE YOUR SURGEON, YOUR PROMPTER, YOUR HELICOPTER

PUMPING OUT THE SLAUGHTERMATIC SOUNDS TO KEEP YOU LIVE

een jaar geleden GemonkDruid said…
Lol, it's 5:30 pm here, so I dunno what she's talking about.

YOU STILL BE CURSED BY REBECCA BLACK

een jaar geleden Gred_and_Forge said…
Hell to the no! I refuse to be linked to that song *lalalala covers ears and hums*

een jaar geleden GemonkDruid said…
Lol, the official video was taken down like a week ago. xD 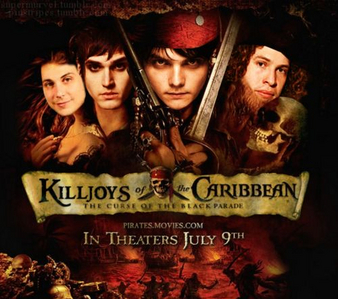 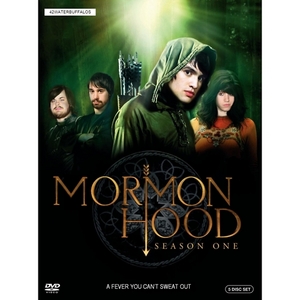 een jaar geleden Gred_and_Forge said…
Is that Ryan at the end? The girl? x]

Hey, someone has to be the girl!

een jaar geleden ThePrincesTale said…
People killing, people dying
Children hurtin you hear them crying
Can you practice what you preach
Would you turn the other cheek?
Father, Father, Father help us
Send some guidance from above
Cause people got me got me questioning
Where is the love?

een jaar geleden ThePrincesTale said…
I have had that verse going through my head ALL FRIKIN DAY. And those are the only words I know...

STOP WITH THE BLUE EYE PEAS ~ 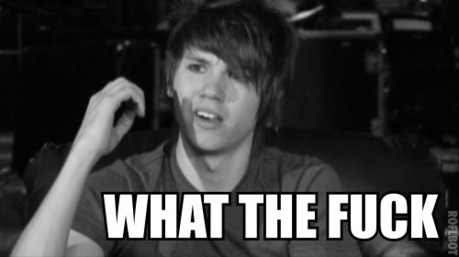 een jaar geleden ThePrincesTale said…
And it's not my fault I've had them stuck in my head ALL FARKIN DAY. 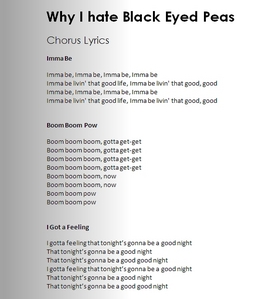 een jaar geleden ThePrincesTale said…
YOU'RE NOT GONNA GET ANYTHING STUCK IN MY HEAD.

een jaar geleden ThePrincesTale said…
You're the one responsible for getting me into Green Day and it's ENTIRELY YOUR FAULT that I got Boulevard of Broken Dreams stuck in my head for 2 WEEKS STRAIGHT.

IT'S ABOUT TIME YOU GET OFF MY DICK

A FEW TIMES YOU'VE BEEN AROUND THAT TRACK

BUT YO ASS IS STILL FAT

COZ I AIN'T YO HOLLABACK BOY

een jaar geleden GemonkDruid said…
I got you into Green Day? YAAAAAAAAAAAAAAY ~

een jaar geleden ThePrincesTale said…
Yes, you did. Do you know how many times I've listened to Boulevard? And how much money I spent on iTunes getting Green Day songs BECAUSE OF YOU?!

een jaar geleden GemonkDruid said…
ON MY OWN, HERE WE GO

een jaar geleden GemonkDruid said…
I downloaded all of my music semi-legally. lol.

een jaar geleden ThePrincesTale said…
^^What are you on about?

een jaar geleden Louise-Weasley said…
I joined this just so i can write a reply for this.

I have seen many people argue over wether Harry Potter is better than Twilight etc. At the end of the day i think it is all based on opinions. I am a Potterhead, therefore i am going to say Harry Potter is better... but instead of carrying on with this list, i am going to explain my own reasons to why i think it is better, as i do not know what has already been said in this forumn.

I personally feel the Harry Potter books are a lot better written. I read Twilight once, and part of New Moon and i couldn't get into it. I could tell Meyer had never written before because i felt the descriptions of people were terrible, and it only went on about how beautiful Edward looked, the descriptions were brilliant in Harry Potter and i could easially imagine what the characters looked like.

I felt there was no emotion in Twilight. I saw Bella as a depressed teenager who needed to get a life. She never seemed happy and always had the same depressing emotion. In Harry Potter you can feel the love Harry had for his friends and family, and his want to have his parents back. You could feel the hurt when Ron left in the Deathly Hallows, and the tension between Ron and Hermione from book one. Harry Potter is the only book i have ever cried at, whereas with Twilight i found it so dull and depressing i stopped reading it.

I think the Harry Potter fanbase is bigger and better than Twilight. When it comes to the Twilight fan base i have not only seen them bashing Harry Potter but bashing and arguing with EACHOTHER I saw some twihards arguing and being REALLY unnecessary to eachother the other day about wether Team Edward or Team Jacob was better. One of them was calling Edward ugly and mean and a terrible character - Twihard this was... I have never seen Harry Potter fans act this way to eachother or about the characters. HP fans disscuss the books and films, and don't argue and fight, we love every single character, good or evil, ugly or beautiful. Take Bellatrix for example, she is an horrible, ugly, manipulative and all round evil character, and HP fans LOVE her, I have not seen one fan bash her, nor do they bash the people like the Malfoys, Kreacher or Voldemort himself, unles it was a joke (such as Voldys lack of having no nose, and i want to clear up he has no nose because in the book he was described to be snake like.. he has 'slits' for nostrils and the eyes of a snake - which takes me back to the fantastic descriptions in the HP series!)The fans love every single character in the book even if they are mentioned one sentence in one book. Twihards seem to enjoy bashing eachother about which character is better and who is better looking...great fanbase.

Harry Potter takes you to a place called 'your imagination' the whole book is full of made up places, people, objects, spells, creatures and so much more! JKR's creativity has given people a chance to let their mind run free, and given me a magical childhood! Twilight has real places, with 'muggle' characters apart from there being sparkly vampires and werewolves that can transform at will rather than the traditional full moon. infact i think the sparkly vampires and werewolves changing at will is the only creativity in the book.

I don't think Twilight has much of a plot. To me, it seems to be about a girl who falls in love with a vampire but also loves a werewolf and gets into some trouble with other vampires... about it really... Harry Potter is a teenage boy who finds out that he is a wizard and attends a wizarding school and over the seven years, he learns different spells and potions and how to use them, how to treat magical creatures, whilst every year also getting into some sort of trouble! until eventually he has to defend the wizarding world AND the muggle world from the likes of death eaters and realising he has to defeat the evil lord voldemort with the help from his friends searching for horcruxes that are a part of voldemorts soul and has to destroy them in order to destroy the evil dark lord himself! A book about loyalty, love, bravery.. i know which book i would rather read.

Harry Potter taught me more as well about how love conquers everything, loyalty, and standing up for yourself and what you believe in. Twilight taught me that i need a boyfriend in my life...
Bella is not a good role model, when her boyfriend left her she went into deep depression (as in more depressed than she already was..) and started to try and commit suicide to see her boyfriend again... Hermione on the other hand, brave and brainy, making bookworms cool, when her love (Ron) left her, she carried on searching for horcruxes with Harry to help defend the world for wizards and muggles alike.. yes she cried.. but why wouldn't she, point is she carried on.

There are many other reasons i feel Harry Potter is better but those are the main ones, I can re-read the Harry Potter books over and over again, but when it came to Twilight I only read up to about half way of New moon before i got bored and watched the films instead, but at the end of the day, which book is better is based on opinions. My opinion Harry Potter is 1000+ times better than Twilight, and i am so sad to see it end after all these years, it has been my childhood and i hope people for generations will enjoy this magical masterpiece :) 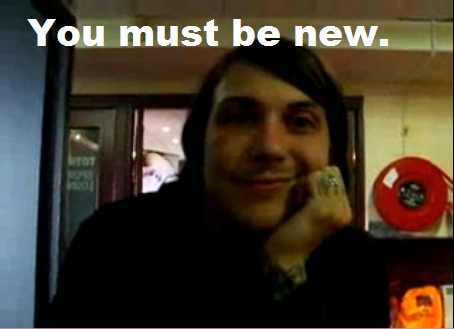 I BEAT ALL OF YOU AGAIN

een jaar geleden ThePrincesTale said…
Ugh, GD, that pic is so creepy! Trying to scare all the innocent little noobies away, you meanie. 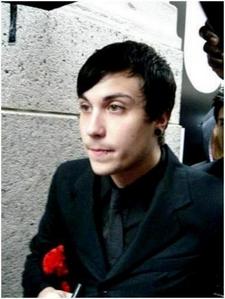 een jaar geleden potterrox said…
yoyoyoyoyoyoyoyoyoyo! know what makes me happy? this forum has almost 50000 replies!
Previous
Something to say? Sign in with one of these options:
Log in to Fanpop! Not yet registered? Create a new Fanpop account!